Taco Bell's Taco Filling: Could Be a Whole Lot Worse 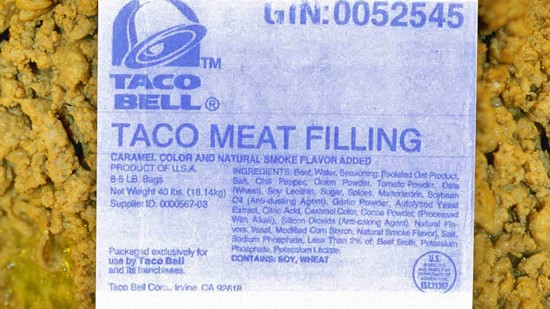 Holy crap, Taco Bell! Your beef is alleged to be only 36 percent beef! How could Yum! Brands have lied to Americans for all these years?

The big to-do started on Tuesday, when Montgomery, Alabama, law firm Beasley, Allen, Crow, Methvin, Portis & Miles filed a class-action suit on behalf of California resident Amanda Obney against Taco Bell, claiming the fast-food chain's taco filling ain't beefy enough. The firm hired a lab to analyze the substance with which Taco Bell stuffs its tacos and found it contains only 36 percent beef. (The other 64 percent of the brew consists of water, wheat oats, soy lecithin, maltrodrextrin, modified corn starch and an anti-dusting agent.) Beasley, Allen, et al., demand that Taco Bell be upfront about what they're hawking inside those tortilla shells of theirs.

The U.S. Department of Agriculture requires that anything passed off as "beef" must consist of at least 40 percent beef, along with whatever additives -- be they water, phosphates, extenders, binders or seasonings.

So Taco Bell's got a problem, right?

Naturally the company struck back, asserting that the ground beef in the taco filling is 100 percent ground beef. They later backtracked, clarifying the meat is actually 88 percent beef -- either way, they'd seem to conform to the USDA's beefy requirements.

Still, the news freaked the taco-consuming public the fuck out!

A recent search on Google News returns more than 800 stories and 41 blog posts about the controversy.

What are people saying?

Until this matter is settled, I'd stick with the bean burrito. - Broward Palm Beach New Times

Show of hands: How many of you actually thought prior to Tuesday that Taco Bell was filling its tacos with 100 percent beef and are willing to admit as much in a national forum? Let's see. Amanda Obney has her hand up out there in California, as does her crack team of Alabama attorneys. Anyone else?

Didn't think so. The mystery-meat mystique has surrounded fast food ever since Fred Flintstone ordered his first Bronto Burger at the Bedrock drive-in.

Let's say Taco Bell's beef-type substance is loaded with fillers and binders. Not hard to picture if you read the ingredients list on the beef. But who reads the ingredients, anyway? Most of us can't even be bothered to pay attention to calorie counts when they're listed on the menu. Why in the world would we make that extra effort to read a label?

For that matter, how do the ingredients on the Taco Bell filling label compare to vegetarian Boca Crumbles?

But that's all-natural and healthy, right?

Now, what does the lawsuit claim sullies Taco Bell's beef?

Water. We know what water is, right?

Wheat oats are...oats. Not great for people with wheat sensitivities who might indulge in a crunchy taco. Otherwise, it's fiber. There's three grams of dietary fiber in that taco, and it's probably not coming from the iceberg lettuce shreds and flavor-free tomatoes. A similar taco at Del Taco contains one gram of fiber.

Even if you haven't eaten a Taco Bell beef taco today, you've probably already ingested three grams of soy lecithin. The University of Illinois describes lecithin as "one of the byproducts produced when soy is processed...[,] used in foods as an emulsifying agent." It keeps fat from separating. Lecithin is approved by the USDA as a dietary supplement because it is thought to possibly lower one's cholesterol and improve liver function. (This is not to imply that Taco Bell claims to fix your cholesterol or your liver.)

Maltrodrextrin can be found only in news articles about Taco Bell and on Hungarian websites. Perhaps that's because the correct spelling of the term is maltodextrin, which can be extracted from any starch. The body treats it like glucose. It's an artificial sweetener. Not great, but people who point fingers at Taco Bell while slugging back diet sodas might want to reconsider.

Modified corn starch is in damn near everything. If you're going to worry about the processed corn product in a Taco Bell product, start with the dang taco shell.

There's an argument raging at Huffington Post regarding "anti-dusting agents", so fierce that one commenter has been called a "reactionar­y duodlebutt." The set-to does invoke the ingredients list on the beef's original package, which lists the agent in question as soybean oil. Which you have in your kitchen if you own a bottle of vegetable oil.

There are plenty of reasons to hate Taco Bell -- flavor, factory-produced "food," the homogenization of the American landscape. Even dishonesty. None of those is anything new in corporate America, but all are more valid than suing them for their profligate use of fillers.