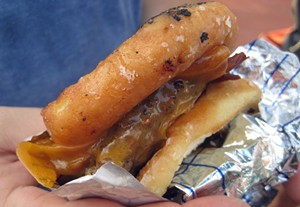 And you thought Baseball's Best Burger would be hard to top.

The Gateway Grizzlies are proud of their concessions, and we respect that. Last year we respected 'em so much that we sent a writer out to compare three of their offerings head to head to head. The nachos came out on top, edging out the hot dog. Bringing up the rear was the famous "Baseball's Best Burger," the one with cheese and bacon, served on a bun fashioned from a split Krispy Kreme glazed doughnut.

Now along come the Akron Aeros, the Double A affiliate of the Cleveland Indians, with their heart-stopping "Nice 2 Meat You" burger.

This pile of protein, which will debut when the Aeros open their home season April 7, consists of a one-and-a-quarter-pound patty, stuffed with a half-pound hot dog, plus a quarter of a pound of bacon, cheese and onions. Sort of like a turducken, only...not. We can think of only one thing that could beat this: Stuff one of those Baseball's Best Burgers in there too.

The very thought had Gut Check idly mulling an early-April field trip to Akron (we hear it's gorgeous there in the springtime). We stopped idly mulling and dug out the Rand-McNally when we saw the ballclub's touting a hot dog as well. The "Three Dog Night" comprises a hot dog stuffed inside bratwurst stuffed inside a kielbasa, topped with sauerkraut and mustard and served on a hoagie roll.