#30: The "Heart Stopping BLT" and a Chocolate Malt at Crown Candy Kitchen 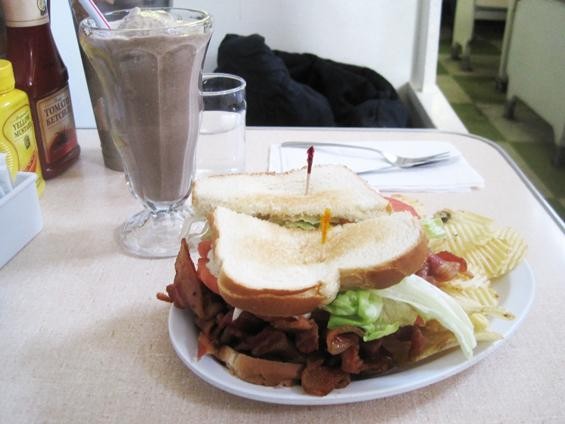 The famed challenge at Old North St. Louis institution Crown Candy Kitchen dares diners to finish five malts in 30 minutes. Though I detest eating challenges, I confess an admiration for anyone who completes this challenge or even comes close. Given 30 minutes this afternoon, I couldn't finish one chocolate malt.

The BLT might have had something to do with that.

The "Heart Stopping BLT" contains, by a conservative estimate, an entire pig's worth of bacon. Possibly two pigs. There are a few tomato slices and some lettuce, but, really, this is a bacon lover's dream, crisp slice after crisp slice tucked between plain white toast.

The malt is pefect, sweet and rich, thick enough that you can't give yourself a brain freeze. Unless you try to down five of them in 30 minutes. In which case, your brain -- not to mention your stomach -- is probably impervious to the concerns of mere mortals.