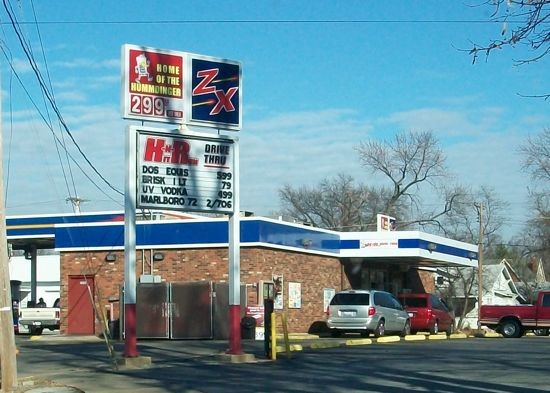 Today's Question: How many of Michael Pollan's Food Rules can be broken in a convenience store at breakfast time?

​How many of Michael Pollan's Food Rules can be broken during breakfast at a convenience store? Rule #20, "It's not food if it arrived through the window of your car," is a good place to start if you're trying to make the case that Hit-N-Run -- self-styled "Home of the Hummdinger," renowned for its double drive-thru, which requires carhops to sherpa orders out both sides of the store -- is one of the most anti-Food Rules establishments in the metro area. It's a lazy drinker's dream: The only muscles you'll need to exercise are in your foot, when you step on the gas after paying up.

But let's venture inside for a closer look at the Food Rules infractions on offer here.

The inevitable involuntary comment, "Jesus, you sure do like your sugar," prompts Freckles to grin a mouthful of surprisingly healthy-looking chompers and reply, "Yep, if it don't hurt my teeth, it ain't sweet enough." He wanders back to a bottle-lined nook and orders a half-pint of gin. "Gin tastes better with coffee than vodka does," he assures you and the neck-tattooed cashier with a nod. This is your cue to pump your own cup of hot black Serious Coffee and purchase some breakfast.

Those three rules are broken at Hit N Run like eggs on Halloween night. The "beans" and the "juice" contain twelve and eleven ingredients, respectively, and best of luck to local third-graders who try to get their mouths around "carnauba" and "acesulfame." As for pretending to be something you're not, one needn't elaborate beyond "Boston Baked Beans" and "Bug Juice."

Wicked Sour Cherry Bug Juice would taste even better with gin than coffee would, but combine it with UV Blue Raspberry Vodka (also for sale here) and you're talking purple and potent -- Bug Potion #9. But lest one be tempted to reconcile early-morning alcohol consumption along these lines with Rule #43, "Have a glass of wine with dinner," don't bother; UV Blue Raspberry Vodka isn't made from grapes. Hell, it's not even made from blue raspberries -- just wood chips and about 24 other unpronounceable ingredients.

Truth be told, Hit-N-Run pretty much smashes all 64 of Pollan's Food Rules into brittle shards of imitation intelligence, even Rule #39, which starts out so cheerfully doable: "Eat all the junk food you want...." Naturally, the story doesn't end well: "...as long as you cook it yourself."

How is anyone supposed to cook up a batch of Jolly Ranchers at home?