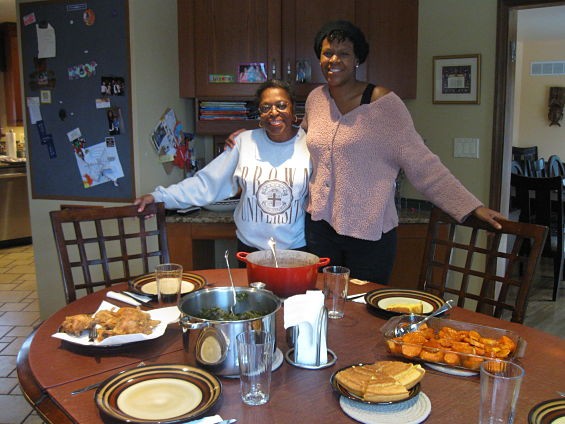 Few cuisines would appear to be as incompatible -- nay, irreconcilable -- as kosher food and soul food. It's not that Jews don't have soul -- it's just that they're strongly discouraged (OK, forbidden) from eating pork, one of the foundations of good, traditional soul food.

Unlike a lot of kosher-keeping Jews, Andria Simckes, who lives in Creve Coeur, knows from good soul food. She was raised Baptist outside of Cleveland by a mother who came from West Virginia and a father from Mississippi; her mother, Evelyn, taught her to cook when she was a girl. As a student at Brown University, she sang in a gospel choir, but she was always fascinated by Judaism, and after law school she decided to convert. (Her maiden name was Lard, which, she says, provoked the expected jokes.)

"It didn't take me long to pick up kosher cooking," Simckes says. "I started when I converted." Then she married the son of a rabbi. "I know how to make them comfortable and keep them comfortable," she says of her in-laws. "I'm not going to compete or prove I'm Jewish enough for other people. I'm Jewish enough for me. Rabbis eat in my home, so it's kosher enough for them." Her three children have never eaten non-kosher meat.

Still, she missed the food she grew up with: collard greens and fried chicken and chitlins and sweet potato pie. Over the years, she and her mother have been altering old family recipes to fit her new kosher family. 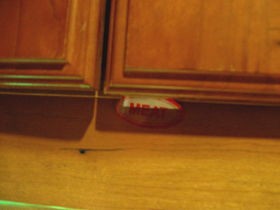 The rules for kosher cooking are fairly basic: no meat from animals with cloven hooves (e.g., no pork), no fish that don't have scales or fins (no shellfish or bottom feeders), no mixing milk and meat, ever. (That means no cheeseburgers and also that every kosher kitchen has a minimum of two sets of dishes and silverware, two dishwashers, two sinks and two ovens so meat and dairy never meet and contaminate each other.)

Eggs, fish, bread, vegetables and beans (including black-eyed peas) fall into a category called pareve, neither milk nor meat and therefore edible with everything, but a strict kosher cook will still read the lists of ingredients on packages of prepared food, to be absolutely sure there's no hidden meat or dairy.

(The basis of all kosher cooking comes from the long list of prohibitions in the book of Leviticus, such as the one that says a calf should not be cooked in its mother's milk.)

Several agencies, of which the Orthodox Union is the most well-known, send teams of rabbis to food-processing plants to inspect the facilities and production. If everything is up to kosher standard, the agency will allow its logo (known as a hechsher) to go on the packaging. It's the kosher equivalent of the Good Housekeeping seal of approval. 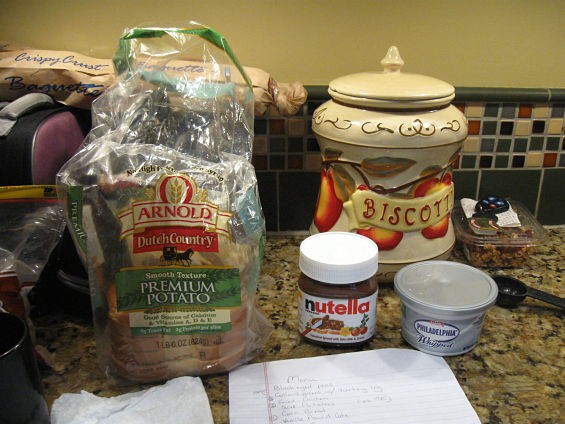 "You can make substitutions to any recipe to make it pareve," Simckes says. "You use margarine instead of butter. Instead of milk, you use soy or rice milk." That said, only one brand of margarine and one commercial brand of bread are certified pareve (that would be Fleishmann's margarine and Arnold potato bread), and Simckes and Lard have invested a lot of time in trial and error to accommodate differences in texture and flavor. "We tweak until we get it right," Lard says. Simckes adds, "If it's bad, we throw it out." 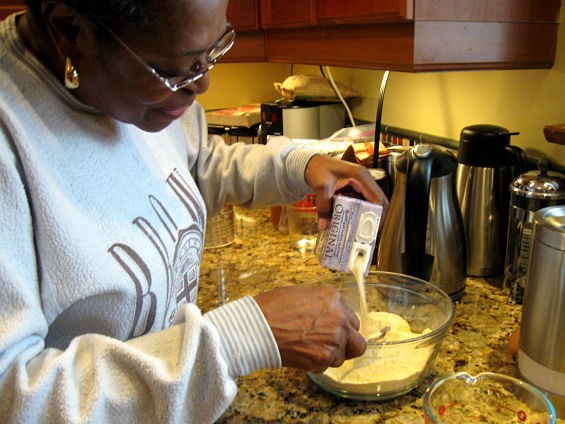 They've worked out plenty of solutions over the years, but some foods still confound them. Lard doesn't believe it's possible to make a sweet potato pie without evaporated milk, and Simckes has come to accept that she will never eat chitlins again. Even something as seemingly straightforward as meat requires some translation. "The cuts of meat are different," Simckes explains. "Kosher has no prime rib. Instead you get rib eye. The first time I asked for beef ribs, the butcher was confused, but the black guys working in the back knew what I was asking for." At one point an exasperated butcher suggested she just go to a non-kosher butcher down the road if she wanted to cook soul food. But that was a long time ago. "By now," Simckes says, "they've gotten used to me and my strange requests."

St. Louis, a town with just two kosher butcher shops, is perhaps not the greatest place to be a kosher cook. "It would be interesting to cook kosher in New York," Simckes says. "The supply is much different. I could really do some good things there. Here we're limited."

Simckes buys her chicken from Trader Joe's. Kosher chickens require special cleaning. Most commercial chickens get dunked in boiling water after slaughter, which cleans off the blood and removes the feathers. Chickens slaughtered the kosher way must be drained naturally, which means no hot water bath. Kosher chicken plants do their best to get rid of feathers with mechanical pluckers, but most of the time home cooks have to finish the job.

First Simckes burns off the stray feathers with a propane torch.

That's the fun part. It also smells good because the flame melts the fat a little. The less fun part comes afterward, when she plucks the follicles out one by one with tweezers.

It would be easier to pull off the skin altogether, but that would be removing an essential part of what makes fried chicken taste so good.

Frying the chicken is still Lard's job. Her secret to a crisp skin is to lift it up so the oil gets underneath and fries both sides. 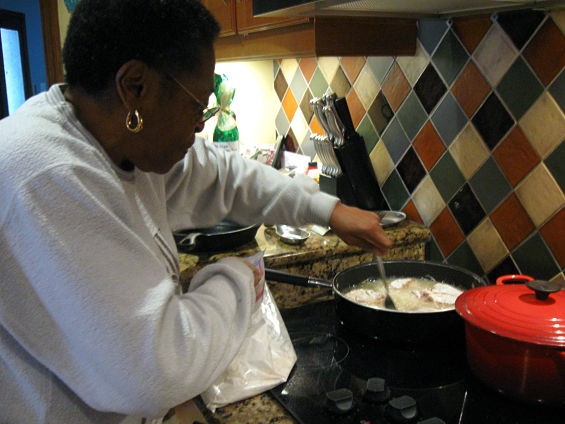 Simckes usually skips this extra step because it's too much work.

Non-kosher cooks use pork to flavor collard greens. Lard uses a smoked turkey leg. It has pretty much the same effect.

Simckes didn't have to adapt her recipe for sweet potatoes, which come in a sauce made with brown sugar and Jack Daniel's; she got it from a kosher cookbook.

All well and good. But how does it taste?

The truth is, nothing can compare to meat from a real pig (though Lard tells her curious grandchildren that Morningstar veggie bacon strips come close). And, despite improvements over the years, margarine and soy milk will never be mistaken for butter or milk from a cow. Margarine is blander, and soy milk is sweeter. But good cooking is good cooking, even when the flavors are slightly muted. And, thanks to its requisite post-slaughter salting, kosher chicken fries up especially well. 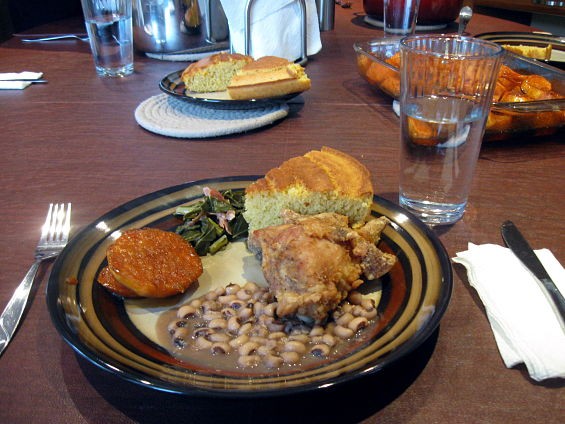 Like many adherents of the organic and slow-food movements, people who keep kosher say the practice makes them more mindful of what they eat. There's a spiritual element to it, too, especially if you come to it later, as Simckes did. It's not quite the same if someone else made the decision for you.

The Simckes family sometimes eats out, but only vegetables and dairy. "One of my children is a big meat-eater," Simckes says. "When we go to restaurants, he's in tears because he can't have a hamburger."

Keeping a kosher kitchen isn't cheap, unless you're willing to go vegetarian. The cost of two sets of everything adds up (plus extra dishes and utensils for Passover), as does paying extra for kosher meat. You could argue, as consumers of organic meat and poultry do, that the high cost ensures that you'll eat less of it, and that's healthier in the long run.

"Keeping kosher isn't hard," Lard says, "but it's expensive. It's fun to help [Andria], but if I had to do all the cooking, I wouldn't do it. Ten dollars for a chicken? Give me a break!"

Maybe that's the price you pay for weaving together two traditions that, on the surface, seem completely incompatible. The amazing part is that it's possible to make them work together at all.

Come back tomorrow to see recipes for this kosher soul-food feast...