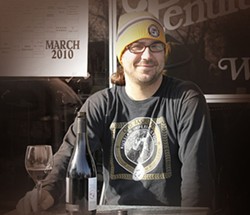 Delmar Loop institution Riddle's Penultimate Café & Wine Bar closed its doors for "vacation" in October of last year and never reopened.
Once owner KT Ayers confirmed that the Riddle's closure was permanent, speculation about the space's future began. It was too prime a piece of real estate to sit empty, but would it reopen as Riddle's -- or something else?
The answer, it appears, is something else.
George Mahe reports on Relish that Riddle's will become Three Kings Public House. Behind the effort are the trio of Derek Flieg (a manager at Riddle's), Ryan Pinkston and Derek Deaver. The menu will be upscale pub fare. According to Mahe's report, the partners plan a March opening.