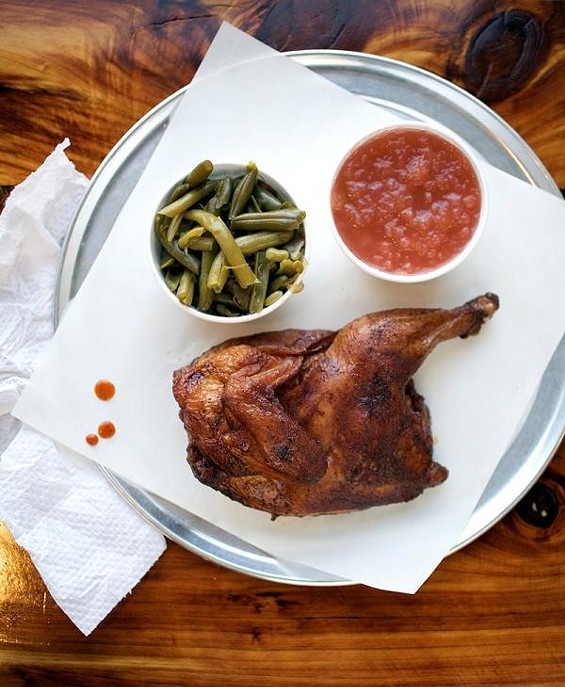 The countdown resumes after a month-long holiday break. Allow me to heap a little more praise on PM BBQ in Chesterfield. The beef brisket here is among the best in town, maybe the best, a fine example of the barbecuing craft -- which is why I chose it for inclusion in my Top Ten Dishes of 2010.

As for the dish that will drag me all the way to Chesterfield on my own dime? It has to be the smoked chicken.

PM trumpets its half-chicken: "First place says it all," the menu claims. And the bird lives up to the hype. The chicken looks to be a fryer, and a small one at that. The dry rub gives its skin an appealing reddish-brown color, speckled with flecks of black pepper. The rub has a mildly peppery flavor, accenting rather than dominating the poultry. The meat is tender, especially the dark meat, with a good balance between the bird's natural flavor and the smoke from hickory wood.

#32: The smoked chicken pizza at Onesto Pizza & Trattoria
#33: The baby-back ribs (or the burger) at the Piccadilly at Manhattan
#34: Albóndigas caseras con patatas at the Guido's Pizzeria & Tapas
#35: The "Sweet Burger" at SweetArt
#36: Buffalo fries at Blueberry Hill
#37: Tom yum gai at Pearl Café
#38: Cassoulet (and Sweetbreads) at Franco
#39: The "Papasan Roll" at Miso on Meramec
#40: Lasagna at Mama Josephine's