Bennett Christofferson is a five-year-old who only eats cheese and wants to be a chef when he grows up.

His mom, Jenn, wrote about her son's persnickety eating habits for a contest sponsored by Sara Lee Deli. The prize: a visit to their Ballwin home by chef Alex Guarnaschelli, executive chef of Butter Restaurant in New York and Food Network personality.

The visit commenced with a trip to Schnucks, where Guarnaschelli offered suggestions --like rolling a piece of Sara Lee deli meat around a piece of cheese for Bennett instead of his regular-old naked cheese. Another: Naming a dish after a superhero or favorite character might make it more appealing. 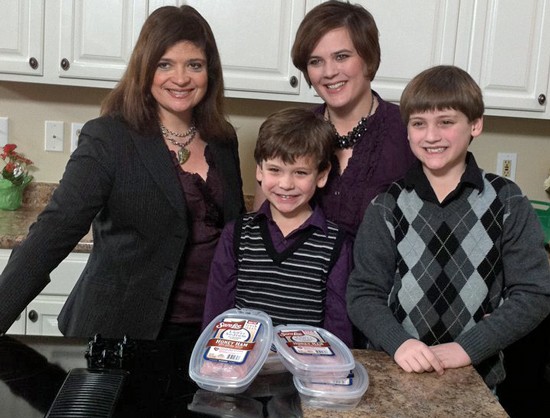 When the cameras got rolling, Guarnaschelli offered her thoughts on how to get picky kids like Bennett to fill their pieholes with substances other than cheese. "We would like it if our kids ate kale and seaweed, but that's not going to happen," she said, and she proceeded to create an assortment of cheese-and-meat-between-slices-of-white-bread variations. Throughout the process, Bennett maintained a level of frisky five-year-old enthusiasm as he was offered ham and cheese, turkey and cheese, and cheese and cheese combinations. Was it the same old thing? Sure it was. But having a high-definition video camera, multiple reporters and a Sara Lee Deli staff beaming down upon you makes anything go down easier.