Latest Possible Cause of Food Poisoning? The Body of Christ 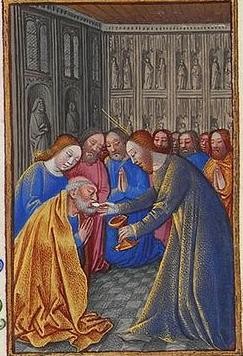 From Newsday, via Gawker, comes a twist to the usual food-poisoning story: exposure to hepatitis A during the communion portion of a Catholic mass in Long Island.


Department and church officials did not name the source of the virus, but said that people who attended services [on Christmas Day] at 10:30 a.m. and noon at Our Lady of Lourdes Church in Massapequa Park could have been exposed during the Communion ceremony, when priests, deacons and selected parishioners distribute wafers and wine.

Mary Ellen Laurain, a spokeswoman for the Nassau County Department of Health, said that "a person involved in the Communion process has tested positive for hepatitis A."

Officials rate the chances of transmission as "low," according to the article.

Now, it's been fifteen years since Gut Check last studied with the Jesuits, but if I remember my Catholic theology correctly, the communion wafer doesn't simply represent the body of Christ but at that moment actually becomes the body of Christ, which means you could contract hepatitis A from the body of Christ.

Well, if nothing else, at long last I have the opportunity to reference transubstantiation in a Gut Check post.

* - Note to Benedict XVI: Though Jesuit-educated for seven years, I'm not Catholic, so put down your excommunicating wand.