Ten Drinks to Help You Forget 2010

While many people are making resolutions and thinking about how to improve their lives (or simply have more fun), there are those among us who would simply like to forget the whole damn year.

Maybe you lost your job. Maybe your relationship ended. Maybe you're still trying to figure what the hell happened on the final episode of Lost. Whatever the reason, we know that there are some of you who want nothing more than to get sloppy drunk on New Year's Eve and put 2010 out of your misery.

If you fall into that category, then this list is for you. Here are ten drinks that are sure to help you black this past year out:

10. The Mind Eraser Sure, this one's a little cliché, but it had to make the list. Seriously, this drink has its name for a reason.

9. Irish Car Bomb Here's a drink that's sure to blow the hell out of a few months!

8. Nuclear Lemonade Thanks to its mixers, this drink is well camouflaged, sweet and innocent to the taste. Most people will have no idea what kind of an intoxication awaits them on the other side: a mushroom cloud of epic proportions in your brain.

And probably your liver.

7. Paralyzer A couple of these bad boys will leave you in a mind-numbed bliss that's sure to obliterate at least a few unwanted memories. Be warned, though: Overindulgence aside, the mere combination of ingredients -- may induce vomiting.

5. Three Wise Men These magi will not be bringing you any gold, frankincense or myrrh, but after a few shots of this trinity you might swear you saw the Messiah. Just remember to ask him to press delete on 2010.

4. Apocalypse Now Speaking of a shot that could induce destruction on a biblical level, check out this bizarre mix. Guaranteed to sound at least a few of the seven trumpets.

3. Everclear Not feeling social? Don't want to waste time with fancy mixes, cocktails or shots? Grab yourself a pint of this flammable frontal-lobe killer and take a few swigs. Everything will definitely be clear -- clear as in empty.

2. Absinthe The hallucinogenic legends of absinthe may have turned out to be bunk. Still, the drink packs a major punch, typically between 110 and 144 proof. Find a local bar that serves it and treat yourself to a few glasses. Who knows, maybe after a few too many you might just wind up seeing a green fairy anyhow. 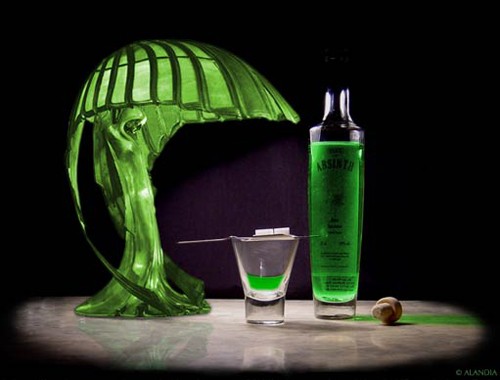