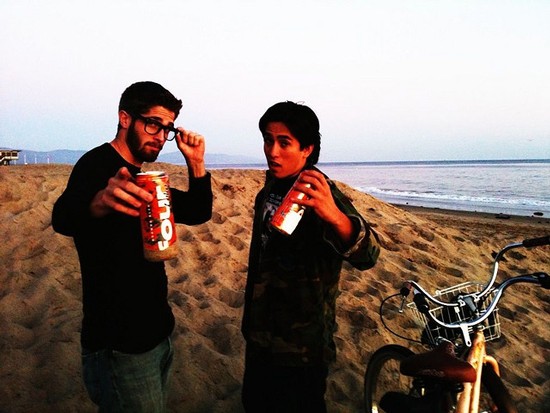 If you subscribe to that line about living fast, dying young and leaving a good-looking corpse, then run, don't walk, to your nearest convenience store for a can of original-formula Four Loko before time runs out. The caffeine, guarana, taurine and, of course, alcohol in this flavored malt beverage will help with the living fast part, and, if legislators are to be believed, also with the dying young.

After several incidents in which college students were hospitalized owing to overconsumption of Four Loko, their respective states banned its sale. The Tipper Gore types of the world got their panties in a bunch over the idea that the brightly colored, sugary-sweet product was being marketed to children, and over studies showing that the combination of caffeine and alcohol is especially dangerous.

Apparently the stimulant effect of caffeine delays the onset of one's perception of drunkenness, causing people to drink more.

"Uh, duh!" replied the chorus of voices of everyone, over several centuries, who has ever consumed a hot toddy, an Irish coffee or a Jäger bomb. Still, in response to the uproar, Phusion Projects, the company that brought us Four Loko, announced on November 16 that it would reformulate its products to remove the caffeine, guarana and taurine.

In the interest of full disclosure, Drink of the Week would like to point out that she should probably recuse herself from this case, owing to her deep and unwavering hatred of all things intentionally misspelled.

Unintentional misspellings, like those that might result from trying to write after consuming an entire can of Four Loko, are excepted. (Aside to editor: sorry.) Nonetheless, we're here to weigh in, because if there is anything this columnist can be relied upon to be, it's late to the party.

Even Saturday Night Live scooped us, several weeks ago, with a bit on Weekend Update, in which Jason Sudeikis, as one of the company's owners, explained that he and his Ohio State buddies came up with the product because they loved drinking but could only drink so much because they kept passing out: "So we tried drinking Jack and Coke, but I don't like Jack, and my coke dealer got busted, so we came up with Four Loko."

As part of our extensive research, Drink of the Week picked up a can of Fruit Punch-flavored Four Loko at our neighborhood 7-Eleven. Four Loko is also available in Grape, Orange Blend, Watermelon, Blue Raspberry, Lemon Lime, Lemonade, and Cranberry Lemonade, but we were directed toward the Fruit Punch by an experienced party.

This resulted in a night of sleeping on the couch fully clothed, including shoes, and waking at 5 a.m. with our contacts glued to our eyes.

Our in-the-know friend Ann said that ours must have been a "new formula" can. She helpfully explained that original-formula cans state on them that the product contains caffeine. She is expert at making this distinction because she collects original-formula cans as lovingly and exhaustively as some people collect Hummel figurines. In her largesse, she generously donated a can of original-formula Fruit Punch to our cause.

The two products look and taste the same. Poured into a glass (we run a classy operation here at Drink of the Week Headquarters), both are the same sweetly innocent shade of pink. Both taste like a can of Hawaiian Punch into which a handful of Tylenol tablets have been dissolved. The difference emerges only upon consumption. No longer either a high school or a college student, we have a hard time seeing the advantage of original-formula Four Loko over the somewhat less gross-tasting Red Bull and vodka, other than not having to procure a bottle of vodka or a cup into which the two can be combined. However, we recognize that for its intended audience, a 23.5-ounce, 12 percent alcohol by volume can that costs just south of three bucks represents a significant time/money savings.

If you have yet to experience original-formula Four Loko and would like to, you have likely missed your opportunity. From what we hear, the stuff has been snapped up by eager fans and trend-hoppers alike from every establishment in the immediate St. Louis metro area. Which raises the question: Would anyone be at all interested in Four Loko if it hadn't become scarce?

When you hear the name "Elizabeth Taylor," do you picture the lavender-eyed ingénue from Cat on a Hot Tin Roof? Probably not. She has been eclipsed by the shellacked, soft-focused White Diamonds Liz Taylor, while her contemporary, Marilyn Monroe, remains platinum and perky for all of eternity. One must suffer the indignities of aging and Michael Jackson association, while the other just huskily sings, "Happy Birthday, Mr. President" into infinity.

Four Loko is more Jayne Mansfield than Marilyn, but the point is, being cut off in your prime is key to being elevated to cult status. If you are unable to find the stuff, visit Ann at the Moolah Theater Lounge on Monday or Tuesday night. She won't be serving Four Loko, but she will make you a tasty drink, and if you're nice, she might even share a few tales from the fast life.