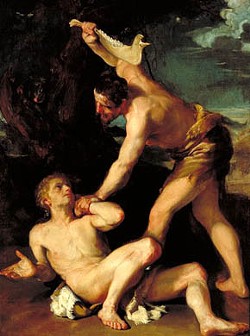 It's been a while since a good story involving both food and violence has found its way to Gut Check International Headquarters. So we are pleased to present, via Eater, news of a battle over fried chicken pitting brother against brother.

Meet Tony and Thomas Morris of Akron, Ohio. On Sunday, the two men were at their mother's house, watching television. Then, suddenly, Tony hurled a piece of fried chicken at Thomas. The Columbus Post-Dispatch relates what happens next:


Tony Morris reportedly admitted tossing the chicken, saying he was angry because he believed his brother took a bite of the chicken and placed it back in a frying pan.

Thomas Morris told police he suggested the brothers go outside and handle their dispute like men. According to reports, Tony Morris then grabbed a crowbar and charged after brother.

Tony whacked Thomas with the crowbar three times before Thomas got hold of a snow shovel and scared Tony away. Tony faces charges felonious assault, domestic violence and menacing. As for the mystery of the chicken?