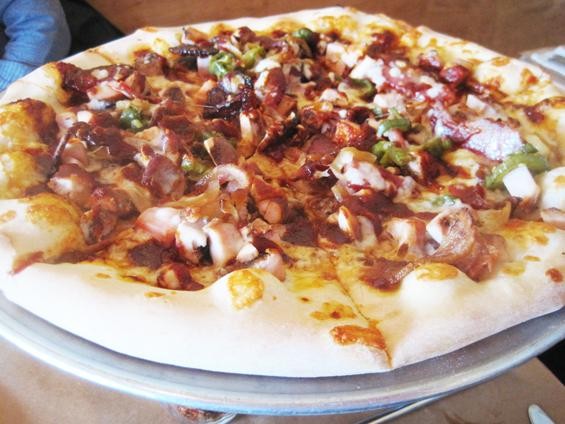 Barbecue chicken pizza is an affront to pizza and barbecue sauce alike -- assuming, of course, the barbecue sauce is any good to begin with, which it rarely is. And of all the tasty meats you can put on your pizza, why would you choose boring ol' chicken?

No, there is no reason for barbecue chicken pizza to exist. Except when it's awesome.

The pizza's name holds the first clue to its success: The chicken is smoked -- beautifully so, the moist meat rich with the flavor of woodsmoke. Pieces of thickly sliced bacon amp up the pizza's smokiness even further -- and prove, once again, that pizza and pork are meant to be together.

The tangy barbecue sauce, judiciously applied on the thin, pleasantly chewy crust, has a mild heat and a faint sweetness. For a more intense heat and a (in this case welcome) sweetness, there are roasted jalapeños and caramelized onions. The mozzarella and cheddar cheese are more accent than main ingredient -- or, if you like, a reminder that you can proudly call this a pizza, barbecue sauce and all.

#33: The baby-back ribs (or the burger) at the Piccadilly at Manhattan
#34: Albóndigas caseras con patatas at the Guido's Pizzeria & Tapas
#35: The "Sweet Burger" at SweetArt
#36: Buffalo fries at Blueberry Hill
#37: Tom yum gai at Pearl Café
#38: Cassoulet (and Sweetbreads) at Franco
#39: The "Papasan Roll" at Miso on Meramec
#40: Lasagna at Mama Josephine's