#33: The Baby-Back Ribs (or the Burger) at the Piccadilly at Manhattan 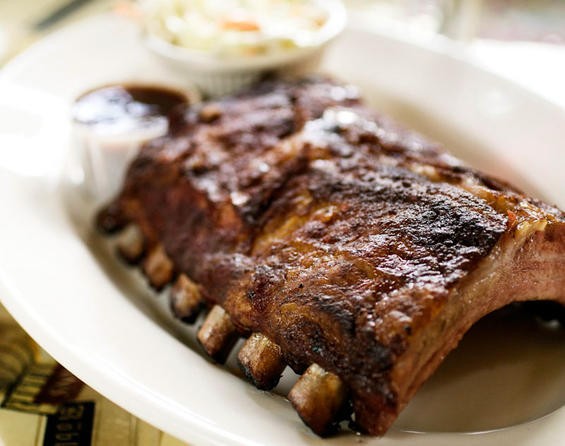 Yet another example of my sneaking two dishes from one restaurant onto this list -- though this time the reason is practical. The baby-back ribs aren't always available at this charming neighborhood restaurant near the border of the city and Maplewood. The burger is a far-more-than-adequate fallback.

If you're lucky, however, owner Nick Collida will be out back of the restaurant, tending the smoker. The baby-back ribs are plump, their meat offering sweetness and smoke and a fine porcine flavor. The sauce, appropriately served on the side, adds just enough tang to cut through the rich meat.

The burger is about as basic -- as essential -- as burgers get: meat, cheese, bun. The double features two five-ounce patties, each thicker in the middle than around, and even cooked slightly longer than I prefer, the beef flavor is primally rich, with a wonderful edge of char.

#34: Albóndigas caseras con patatas at the Piccadilly at Manhattan
#35: The "Sweet Burger" at SweetArt
#36: Buffalo fries at Blueberry Hill
#37: Tom yum gai at Pearl Café
#38: Cassoulet (and Sweetbreads) at Franco
#39: The "Papasan Roll" at Miso on Meramec
#40: Lasagna at Mama Josephine's