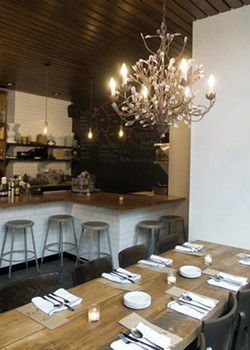 Gerard Craft announced today that he has sold Taste by Niche to Adam Altnether. The 24-year-old Altnether, a graduate of the Culinary Institute of America in Hyde Park, New York, has worked for Craft for several years, most recently as the executive chef at Brasserie by Niche.
Craft remains an investor in Taste, and Altnether will continue with the previously announced plans to relocate the restaurant from its space adjacent to Niche at 1831 Sidney Street to the spot vacated by Moxy at 4584 Laclede Avenue, next-door to Brasserie.
Altnether says that Taste's format, featuring small plates and cocktails by Ted Kilgore, will remain largely the same. "[Taste] is going pretty good right now," and the new Taste will be "heavy on charcuterie and going into European tavern fare."
Craft adds, "The biggest part of this is that it's going to let Adam to step out and get recognized as his own chef."
The relocation -- and, now, sale -- of Taste is one of several changes to Craft's restaurants planned for the coming months. Niche will move into Taste's old space and adopt a more intimate, tasting-menu-only format, while the old Niche space will become Porano, an Italian restaurant.
Craft says the sale of Taste has pushed back the timeframe of the changes somewhat. "Niche will stay Niche until February," he reports, noting that the original schedule was "a little optimistic."