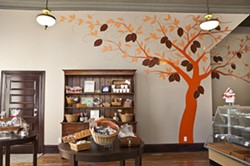 Owner Brian Pelletier tells Gut Check that he has signed a lease to open Kakao Chocolate at 7272 Manchester Road in Maplewood. This will be the second location for the shop the RFT named "Best Chocolate" in 2010, following the original at 2301 South Jefferson Avenue.

As with the original, the new location will feature production and retail of Kakao's all-natural chocolates, though to provide some difference between the two spaces, Pelletier says, "We're going to do something a little different, but we haven't figured out exactly what."

Look for the doors to open in late January. "We're going to be really aggressive about opening," Pelletier says, with an eye to being "well into business" by Valentine's Day.