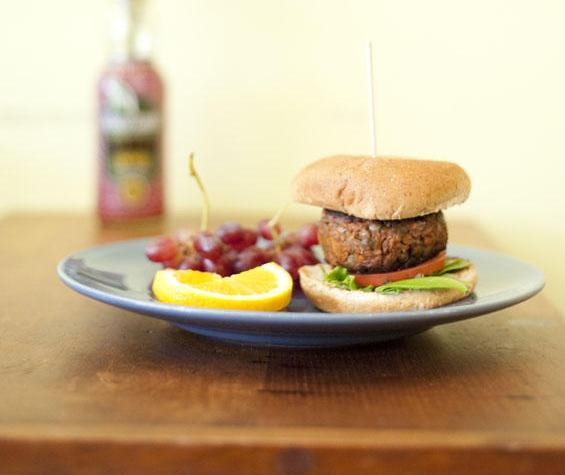 Yes, I celebrated SweetArt's vegan "Sweet Burger" in a review only a couple of weeks ago. It should tell you just how much I enjoyed this burger that it immediately secured a spot on this list.

The "Sweet Burger" approximates the experience of eating a burger without trying to trick you into thinking you're eating meat. The patty is quite plump, thicker than a Thickburger, as impressive in its own way as the monster burgers from O'Connell's or Michael's. Its color is difficult to describe, orange tinged with brown, more appealing in reality than when described on the page. It is served on a toasted wheat bun, with mixed greens, tomato, ketchup and a tangy, lightly spicy "housemade vegan spread." And, if you like, cheese.

The patty is made from onions, carrots, lentils, nuts and, frankly, many other things that I couldn't quite place -- bulked out, it seems, with textured vegetable protein or something like it -- but that contribute to a flavorful whole. The seasoning is key, warm spices (vaguely Indian in their overall effect) combined with a very mild sweetness. The exterior of the patty was nicely browned, giving the flavor its most "burger"-like note. Its texture, like the color, is tough to make clear, something like a loosely packed, medium-rare burger. It has enough bulk to be as satisfying as any meat-intensive sandwich, and without the lingering heaviness of a true burger.