Orthodox Synagogue Wants You to Know: Kosher Food Can Be Fun!

About ten years ago, a certain reporter toiled as an editorial assistant at an educational publisher. The publisher was working on an anthology of Jewish literature, and, since it was a small and democratic sort of place, and also since the editors were fresh out of inspiration, they solicited title ideas from the entire staff.

The young (and Jewish) editorial assistant suggested The Cockroach of World Religions as a tribute to the Jews' ability to survive multiple efforts to exterminate them, and also to their ability to live and thrive just about anywhere that would have them. The suggestion was applauded (well, laughed at indulgently) and then rejected, as the anthology was partially funded by a Jewish educational foundation that, presumably, didn't have much of a sense of humor.

We must admit, grudgingly, that perhaps The Cockroach of World Religions could be considered offensive in some quarters. But the sentiment holds. Consider the the St. Louis Kosher Chili Cook-Off, which will take place this Sunday, November 21, at the JCC Staenberg Family Center in Creve Coeur. It's sponsored by Nusach Hari B'nai Zion (NHBZ), a modern Orthodox synagogue in University City. Orthodox Jews are not really known for their chili-cooking prowess, but they are an adaptable population.

This is the sixth year NHBZ has sponsored the chili cook-off. It was inspired by a similar event at a synagogue in Dallas which attracts 1,000 competitors every year. Of course, acknowledges Bob Kaiser, a spokesman for the synagogue, chili in Missouri differs vastly from chili in Texas. Jews can only adapt so far.

"It's not a serious chili cook-off," Kaiser admits. "We allow chili with beans which is, I'm told, a cardinal sin in the chili world."

Also, the Missourians cook their chili in crock pots while the Texans use turkey fryers.

Nonetheless, Kaiser expects a dozen teams to attend this year's cook-off. The $50 entry fee includes kosher meat and use of a kosher crockpot and utensils, provided by NHBZ. 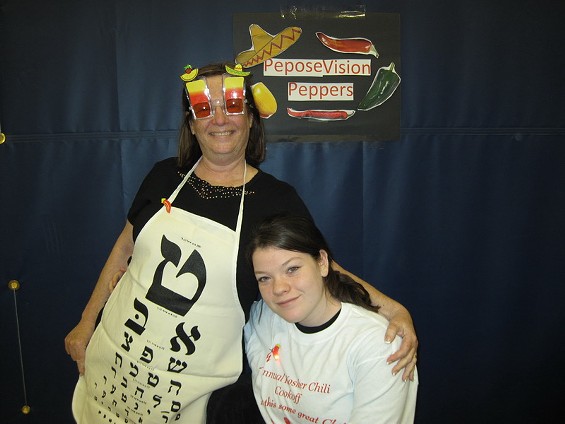 Many competitors will come in costume or, at the very least, decorate their booths with lights and crepe paper. (Kaiser's wife has been competing all six years with the same group of friends; they dress up as the Red Hot Chili Chicks.) There will be cash prizes for best meat chili, best vegetarian chili, best youth division chili and a people's choice award. There used to be a prize for best white chili, but, says Kaiser, the category never had more than one entrant per year. "It was like taking your sister to the Prom."

In order to insure fairness, three judges have been recruited from outside the synagogue: the builder of NHBZ's new building in Olivette, a member of the Olivette city council and a man who purchased his judge-ship at a fundraising auction. All three will be identified by the stupid hats they will be forced to wear.

The chili cooks come from all sectors of the Jewish community. Non-Jews are also welcome, Kaiser hastens to add, though none have shown up yet.

"We see a team from Epstein Hebrew Academy and a team from Ladue and a team from Solomon Schechter [Day School] and the temple in St. Charles," says Kaiser. "That part makes me happiest. There's so much focus on our differences, but we can put it aside and eat chili."

The cooking starts at 2 p.m. The eating starts at 5:30. Eating privileges cost $6. Sadly, the recipes for the winning chilis will not be readily available. "But I'm sure they would be if we asked," Kaiser says encouragingly.