Jeff Ruby's and the Case of the Disappearing Website, Part 2 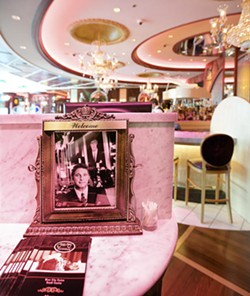 I have phoned Jeff Ruby's corporate offices multiple times, before and after publishing that post, seeking clarification, but my calls have gone unanswered.

Today, Joe Bonwich of the Post-Dispatch asks the question that many of us have been asking for several weeks now: Is Jeff Ruby's closing?

The restaurant is open today. When I called, I asked the woman who answered the phone for clarification (from anyone at the restaurant, not specifically her) about what was happening. She directed me to call...wait for it...Jeff Ruby's corporate offices.

Which I did. And left a message. Again.

When I spoke with Mack Bradley, who provides public relations for River City Casino, for my previous post, he told me that while the casino is "looking at several things," a change to Jeff Ruby's "is not one of them." I have call in to Bradley and will update this post with any information he can provide.

I try to be as careful as possible when reporting on restaurant closings. A rumor or tip that turns out to be false can be damaging, even fatal, to a restaurant. Which is why I'm shocked that Jeff Ruby's appears to have avoided multiple opportunities to explain the "disappearing" website and either confirm or deny its obvious implications.