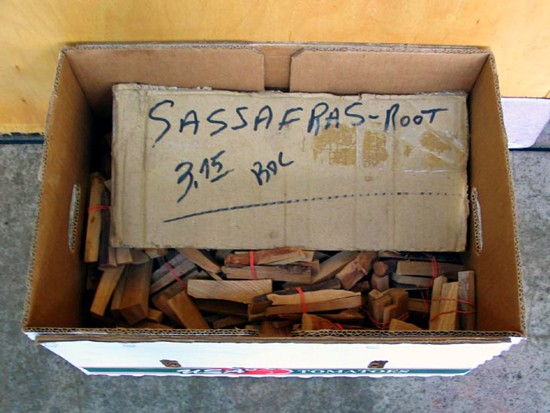 Before researching this column, Drink of the Week knew one thing about root beer: It is made from sassafras. We knew that because many years ago, on a hike in the woods with Grandpa, he pointed out a sassafras tree. He snapped off a small branch, split it with his pocketknife, and gave us a whiff. He said you could boil the bark and make root beer. We never were much of a nature enthusiast, but our interest was piqued when botany ran into food.

In fact, we were probably morel hunting at the time, the promise of mushrooms sautéed in butter and breadcrumbs the inducement to climb those hills. Strangely enough, what we recall most fondly isn't Grandma's unmatched country cooking (chicken and dumplings and, oh, peach pie), but the view. They lived on a little peninsula between the Mississippi and Illinois rivers, the house Grandpa built tucked amid miles of rolling hills and river bluffs. The only encroachments of man were wide swaths of farmland, gravel roads and telephone poles.

At least that's how we remember it. We can't go back, because someone else owns that house now. Grandpa is in the ground on one of those breathtaking hills with Grandma lying next to him, and, as it turns out, root beer is not made from sassafras.

It hasn't been since 1960, when the FDA banned the use of sassafras oil in commercially produced food and drugs because its primary compound, safrole, was shown in studies to cause cancer in rats.

A quick Wikipedia search reveals all this and more. Safrole is also the main ingredient in the drug ecstasy. Yep, in the good ol' days Coca-Cola packed a wallop of actual cocaine and root beer delivered a dose of safrole. Turn-of-the-century soda shops must've been the place to par-tay. Nowadays the only thing you get in soda is corn syrup.

We could have gone our whole life without knowing about the root beer/rat cancer connection. We could have gone along thinking that root beer is made from sassafras trees, keeping our sweet, if erroneous, childhood memory intact. But we had a can of Hansen's root beer with lunch at Winslow's Home and thought it had potential as a Drink of the Week.

Hansen's claim to fame is that their sodas are all-natural; thus their root beer contains actual sassafras extract (albeit with the safrole removed), as opposed to the artificial sassafras flavoring used by most popular brands. Hansen's version is rounded out with wintergreen, birch, anise and Tahitian vanilla extract, and sweetened with cane sugar.

Winslow's Home is a University City café going for this old-timey general store kind of feel. They sell sundries of all stripes, from journals to dishware, with a heavy emphasis on nostalgia -- vintage toys like pick-up sticks and old-fashioned candy like Necco wafers. It's like an urban, upscale Cracker Barrel. Tables are scattered throughout if you're dining in, they stock pantry staples and offer prepared food to-go if you're headed home. Much of the produce used in their kitchen comes from their own farm in Augusta. They sell milk in glass bottles and cartons of brown eggs.

Dictionary.com informs that the word nostalgia comes from the Greek nostros, "homecoming," and algos, "pain, grief, distress." Basically: homesick. The thwarted desire for a certain place or time. It's what people mean when they say, "You can't go home again." Even at Winslow's Home, the quaintness has its limits. If you take your lunch on the patio, you will dine to the sound of Delmar traffic whizzing by. That dozen eggs cost $5. They also sell boxed wine and instant pancake mix.

Lou Reed said, "I don't like nostalgia unless it's mine." Got that by Googling "nostalgia quote." Here's another, from politician George Ball: "Nostalgia is a seductive liar." Next to the quote is a little blue "f" icon -- with just a click you can post it to your Facebook page and instantly share that thought with everyone you know.