#41: The "Bucktown" Pizza at Pi Pizzeria 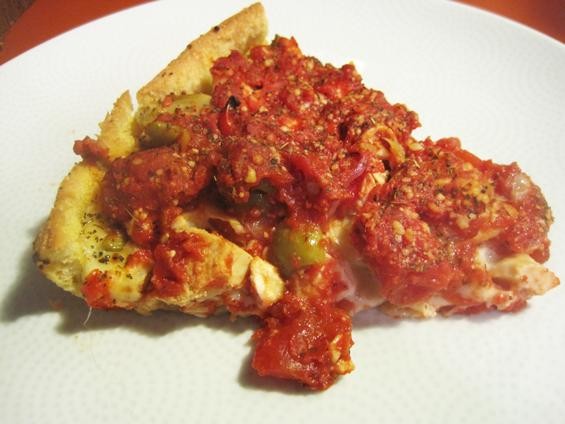 I'm as guilty as anyone of contributing toward the hoopla surrounding Pi. President Obama declaring it his favorite pizza. Chris Sommers and crew cooking in the White House. New locations in St. Louis and, soon, in Washington, D.C. Gut Check has covered it -- perhaps exhaustively.

Still, it's damn good pizza. The "Bucktown," one of the deep-dish varities, is my favorite.

The core toppings of the "Bucktown" -- mozzarella, chicken and sun-dried tomatoes -- would make a pretty good pizza by themselves. But Pi goes an extra step, adding artichoke hearts, red onion, red bell pepper, green olives and even a few cubes of feta cheese.

It should be too much, but it works, balancing the heaviness of the chicken and cheese with the tartness of the tomatoes, the sharpness of the onion, the saltiness of the olives and feta.

Of course, most reviews of Pi mention its signature cornmeal crust. With good reason. It's fantastic: the exterior crisp, the texture and flavor of the interior like a cross between focaccia and frybread. How it manages to support the many toppings of the "Bucktown" will take even more exhaustive discussion to figure out.