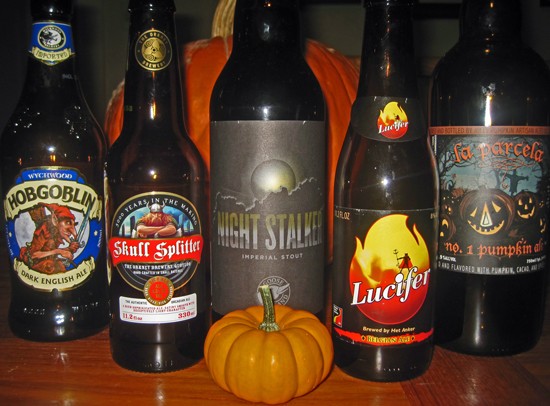 Looking to spice up the beer selection at your Halloween party? Here are ten excellent brews that play up the scary theme with their names and packaging -- and bring the quality as well.

Jolly Pumpkin La Parcela ($15/750ml) For years tiny Jolly Pumpkin has walked the lonely, brilliant path charted by owner/brewer Ron Jeffries, aging their beers in older barrels with a combination of yeast and bacteria. Until this Halloween season, though, Jolly Pumpkin has not made a beer that contains its namesake squash. This first effort is bursting with complexity -- crisply sour at first whiff but deeply earthy and spicy when you take a swig. Stunning stuff. Set aside your preconceived notions of what beer is, because Jolly Pumpkin beers don't care what you think.

Ska Modus Hoperandi ($8/six-pack) The three suit-clad skeletons that adorn cans of this outstanding India pale ale give it instant Halloween cred. The can itself performs a more practical function, protecting the huge hop load within from the dreaded scourge of skunk. Once liberated, it pours a rich amber color and totes along enough caramel sweetness to balance the intensity and bitterness of the hops.

Wychwood Hobgoblin ($4/500 ml; $13/six-pack) The label is by far the brashest thing about this beer, which turns out to be a straightforward English ale. You get a hint of complexity from the yeast and the darker malts, but you'll need to let this one warm up some to even notice. Think of this as a beer to drink when you're of a mind to drink a lot of beer.

Unibroue Maudite ($7/750 ml; $10/four-pack) Not quite as red as the fellow on the label, but this beer does have a burgundy hue -- and a wallop of malty deliciousness with serious spicy notes, courtesy of Unibroue's yeast strain. You can taste the alcohol in here, but since when is that a crime? (Trois Pistoles, from the same brewer, sports an equally unsettling label, and a darker, slightly less potent malt load.)

Goose Island Night Stalker ($9/22 ounces) And speaking of alcohol, beware the Night Stalker, or it'll end your Halloween early. A rich, thick chocolatey, roasty, velvety imperial stout, the alcohol (12 percent) will sneak up on you. This is one to sip and savor late in the game, ideally while swapping ghost stories around the fire pit.

Orkney Skull Splitter ($11/four-pack) Skull Splitter's run-of-the-mill amber hue might lower your expectations, but stick your nose in the glass and you get popped with toffee, candied fruit and a whiff of Cognac. It's equally brawny on your palate, where the malty sweetness runs rampant, checked by just enough bitterness to keep it from being cloying. Gut Check recalls our great joy at finding at this beer on cask at a pub in Edinburgh -- though we don't remember anything else about that day.

Schlafly Pumpkin Ale ($9/six-pack) Schlafly's rendition is one of the best pumpkin beers out there. It's a Baby Bear beer -- not too much of anything that ruins many attempts at this style -- spice, sweetness, malt and balance are all juuust right. Alcohol clocks in at 8 percent, so while it will keep you warm as you trick-or-treat, you need to respect this great Pumpkin. (Note: O'Fallon Brewing's pumpkin isn't quite as burly as Schlafly's but it's plenty tasty too.)

Ayinger Oktoberfest Marzen ($3/500 ml) OK, it's not Halloween themed, but this absolute gem of the Oktoberfest style is still around, and if you haven't tried it, you should. Then you'll know why the lager-philes fawn over its purity of malt and perfect balance. If you have tried it, well, then you're still buying it as fast as you can drink it. Carry on.

Het Anker Lucifer ($16/four-pack) The classic in this style is Duvel, which is a fine choice within this theme, seeing as how the name's Flemish slang for "devil." But your party is likely to include idiots (or inebriates) who lack the linguistic chops to pick up on that pun, so Lucifer is your beer. These strong, pale Belgian ales have the ability to look like innocent pilsners, only to pack an 8 percent (or more) pop. Drink it too chilled and Lucifer's crisp, citric-tinged malt disappears so quickly that you won't be able to find your legs when you try to stand up. Let it warm in the glass a bit and you'll slow down to savor the devilish complexity.

Fantôme (about $15/750 ml) Terrifyingly creative beers emanate from the mind of brewer Dany Prignon. They're not plentiful, and they're not cheap, but they absolutely are worth chasing. And given Prignon's penchant for rarely (if ever) brewing a beer the same way twice, whenever you see one, give it a go. It's sure to provide a truly unique drinking experience.