Secretary of State Hillary Clinton turned 63 yesterday. She celebrated at a viewing of Inside the State Department, a National Geographic documentary about Madam Secretary's job. They even presented her with a lovely birthday cake.

Except it looks a lot like a lovely, plush, sleepy-time pillow. Then again, a birthday cake shaped like a pillow's a nice choice. Most 63-year-olds enjoy naps, especially when they have to stay up late to watch a movie/reality show about themself when they'd rather be home with their husband Bill, celebrating with soy-based vegan snacks.

Or a cake from a St. Louis elementary school teacher. 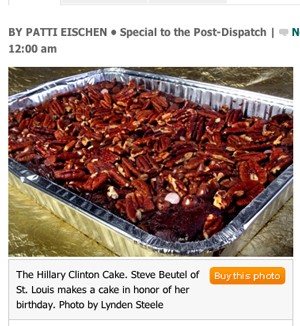 Back in July the St. Louis Post-Dispatch published a story about a fellow named Steve Beutel, a baking enthusiast and ardent Hillary-phile who came up with a cake in her honor a few years back.

Why, you ask, did the Post run a story about a Hillary-obsessed birthday-cake baker in July, when the woman's birthday is in October, fer crying out loud? This is what Gut Check's mother (rest her soul) used to call One of Life's Great Mysteries.

She was also fond of saying, "If my grandmother had wheels, she'd be a bicycle," and Gut Check never understood that either.

At any rate, it does not appear as though Hillary Clinton ever ate Steve's birthday cake, or saw it, for that matter.

Still, a poll would seem to be in order...

If you want to read more about Steve and his cake, the Post story is here.

There's even a recipe!