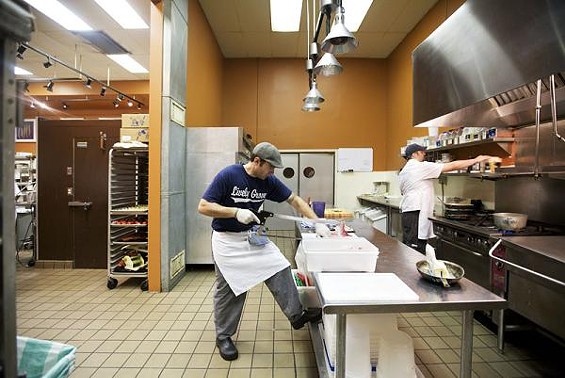 After closing for several weeks of renovations this summer, the bar and bistro of Monarch (7401 Manchester Road, Maplewood; 314-644-3995) feature a new Southern Bistro menu that draws from the Louisiana roots of executive chef Josh Galliano. Follow me after the jump for a sneak preview of my review.

Since Monarch opened in 2003, through the tenures of its original executive chef, Brian Hale, and his successor, Josh Galliano, the Maplewood restaurant has greeted diners with two or even three different faces. There is the main dining room, of course, where the menu aspires to be -- and often is -- among the area's best. In 2009, in fact, I named Monarch the second-most important restaurant to open in St. Louis last decade.

But the dining room proper accounts for less than half of the restaurant's footprint. There is also the bistro dining room and the bar. Each is a self-contained space, yet over the first seven years of Monarch's life, each struggled to establish a separate identity. The more casual bar menu (small plates, flatbreads and the like) the two spaces shared never felt right in the bistro, while the bar's deep wine list and position at the local vanguard of the mixology movement couldn't overcome its impersonal hangar-like size. By the time I reviewed Galliano's work at Monarch ("Josh Almighty," January 22, 2009), the bistro was no longer in everyday use, and the bar doubled as a second dining room.

Visit the RFT restaurant page late tomorrow afternoon or check back here Wednesday morning to see what I think.