An American Place No Longer a St. Louis Place 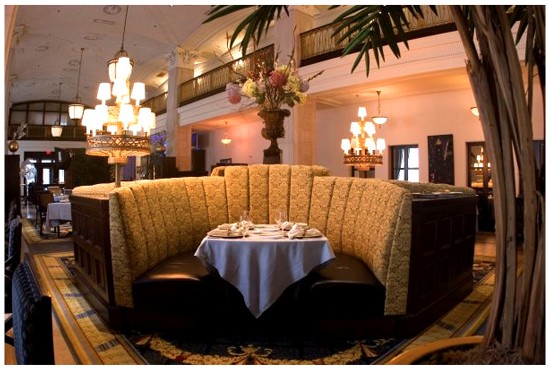 "It was a five-year renewable [lease]," Forgione told Sauce. "I would have considered extending it a little bit, but not for five years."

When Forgione opened the restaurant here in 2004, it was a watershed: the first time a nationally renowned chef brought his big-city culinary act to little old St. Louis. (No, smartypants, Wolfgang Puck doesn't count.) And An American Place St. Louis seemed a worthy trendsetter: a gorgeous bi-level space on the beautifully restored first floor of the hotel. Elegant dining room, plush banquettes, heavy-duty wine list and an ever-changing menu that featured a fair amount of locally sourced products.

Forgione himself was generous and good-humored enough to partner with RFT when we proposed that he prepare a special tasting menu for a story we were working on about St. Louisans' taste for truly local meats -- like possum, squirrel, raccoon and muskrat. Yeah, it was hard not to chuckle, but we were serious about the article, "Eat More Beaver" (sorry, couldn't resist, and we did include beaver), and Forgione, an acolyte of legendary American chef James Beard, was the perfect choice for such a culinary adventure.

For our tasting panel, Forgione cooked up a five-course feast that featured beaver tail on toast, Asian-style marsh hare won tons (marsh hare being a euphemism for muskrat), wood-roasted leg of beaver, raccoon sauerbraten and pan-roasted mignon of beaver.

Though An American Place was well reviewed, St. Louis never entirely warmed up to it.

One bone to pick, broached by Joe Bonwich in his otherwise glowing review in the Post-Dispatch, was price versus portion size:

"I have what could safely be described as a hearty appetite, and I was perfectly satisfied with the portion sizes at An American Place. On the other hand, there's a segment of the local dining community that I'm fairly sure will be nonplussed by the lack of heaping portions of pasta or otherwise voluminous side dishes. I stipulate my potential disagreement with you on this, but I provide you fair warning."

Translation: If locals were going to shell out a few hundred bucks for dinner, they damn well wanted to go home with the ol' Sansabelts stretched.

At a Sauce roundtable in 2008, Forgione vented (just a little):

"...[W]hat I'm concerned about is when somebody doesn't think a twelve-ounce steak is big enough. Or when their double pork chop isn't quite as big as someone else's double pork chop. And I think it's a hard sell to convince people of the quality-quantity spectrum."

So fat-pants St. Louis couldn't get enough, as it were, of An American Place.

And now St. Louis isn't going to get any.