Welcome to Girl Walks into a Bar, a weekly Gut Check feature that spotlights local bars and bartenders. This week Alissa Nelson profiles Ronnie Walters of John D. McGurk's Irish Pub in Soulard. Below is a Q&A with Walters, followed by a video of him and special guest Charlie Myers of McGurk's O'Fallon mixing several Irish saloon classics. 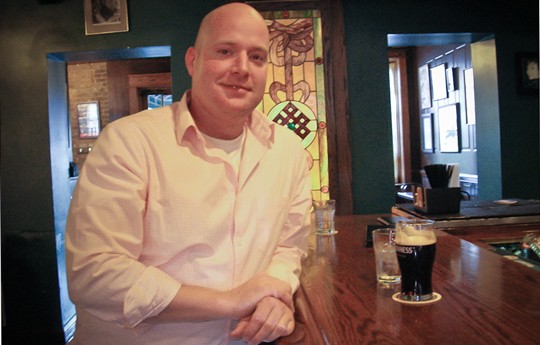 McGurk's is a destination in itself for locals, but the pub's reputation has turned it into a gateway of sorts to the rest of St. Louis. "I used to work Sundays a lot here," says bartender Ronnie Walters, "and it seems like every Sunday there would be somebody who comes in asking questions about where to go and what to do."

Walters has made a career for himself at the Soulard location. He first darkened its door at the tender age of nineteen, snagging a roster spot as a weekend busboy that afforded him the time to play college baseball during the week. "By the time I was 21, I got roped into bartending," he relates. "That became my main focus for a while, and I put school on the back burner. I've been down here working for thirteen years now, and I'm about to graduate with my degree in May, but I'll always work here."

{If you know of a bartender who's deserving of a profile, e-mail tips@riverfronttimes.com}
Click through for a Q&A with Walters and a video of him and special guest Charlie Myers getting down and dirty with an Irish Car Bomb (and then some)...

Walters embodies the easygoing stoicism of the longtime bartender. He isn't prone to theatrics, but his low-key joviality makes him easy to picture out on a fishing trip with his friends or pouring a round of bomb shots to a rowdy group of bachelorette partygoers. In short, he embodies the welcoming spirit of the Soulard institution. "What I love about bartending," he says, "is the regulars, and the reciprocity we have with them."

In three words, how would you describe your bartending style? Versatile, timely and clean.

Favorite drink to make? Pouring a Guinness. It doesn't seem that crazy or that exciting, but pouring a good pint of Guinness when you've got a good keg and everything measures up right -- people recognize that at the bar, and it makes a difference.

Drink you hate making? Probably the lemon-drop shot, because you have to do a sugared rim and everything. But it depends on the mood of the crowd. If it's a rehearsal dinner and nine girls come up and they all want a chocolate cake, you can take pride in making a nice, good chocolate cake. As long as they appreciate a drink, I don't mind making any drink.

Favorite drink you created yourself? I don't have a name for it, but my dad's friend calls it the Concoction. He's been drinking it for years and doesn't know what's in it. It's got flavored vodka, a little coconut rum, peach schnapps and then a little cranberry and pineapple juice.

What is the worst drink you've ever had? Scotch and soda. I like Jameson, I like Irish whiskey. I just don't have the taste buds for scotch yet.

Favorite drinking ritual? Shots of Jameson with my friends.

...At a wedding? Bourbon and coke or rum and coke.

...At your parents' house? Beer. Whatever's in the fridge.

...Trying to get drunk? Jameson! Or any kind of bomb shots.

Worst/best thing you've ever seen happen in your bar? I have the same answer for both: girl fight. But the best thing was that we had a couple who'd met [in the bar] six or seven years ago and he proposed to her on New Year's Eve.

How do you keep yourself occupied on a slow night? Either reading or texting.

Who would you most like to have a drink with? Right now I'd have to say TLR -- Tony La Russa. I'm interested in seeing if he's coming back, see what he think went wrong with this season.

Where are you most likely to be found when you're not in this bar? I'm kind of all over the place; it depends on the whim. I'm kind of a foodie, but I'm also kind of a cocktail guy, so I like trying out new places. I like theater a lot. In the winter I like going to the Fox, usually the restaurants around there. During the summer we're usually going out to patios, wineries, just spending time in the outdoors.

Best hangover cure? Water and fast food. I don't believe in taking five ibuprofen or whatever concoctions people come up with. I was gonna say an Irish coffee, but that's only when I'm out of town fishing, hunting, whatever it may be.

If you could start a band, what kind of band would you start? Hip hop.

Best/worst drinking holiday? I have to say Thanksgiving is kind of a nice night. It's like a party for the regulars who come out a lot. It's like an extended-family drinking party.

Biggest tab you've ever seen? Working rehearsal dinners and parties, I've seen six-, seven-, eight-thousand-dollar parties. But just for a group of people, like a bachelor party, I want to say we had one a couple of years ago that was almost $1,200.

Drunk food of choice? Pappy's. Well, barbecue. If I'm at home and I have the means to cook. If I'm driving home, Steak 'N Shake.

Three adjectives that describe your bar: Inviting, unique and Irish.

My bar is the only bar in St. Louis where... There's five different bars in one, and you can celebrate any kind of moment.