This is part one of Robin Wheeler's Chef's Choice profile of Bob Colosimo of Eleven Eleven Mississippi. Part two, a Q&A with Colosimo, is here; part three, a recipe, can be found here. 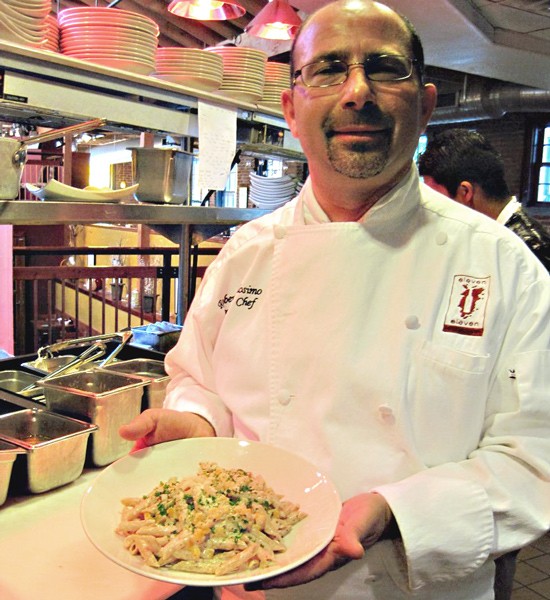 Eleven Eleven Mississippi's Bob Colosimo always wanted to be a chef. "I could never understand people who were in their twenties and didn't know what they wanted to be," he says. "I thought it just came naturally. In time you find out no, people career-change all the time.

"I always wanted to be a chef. That or a railroad engineer -- my father was in the railroad business. When I was in high school, one of my guidance counselors said, 'Bob, start saving your money because you're going to go to the Culinary Institute of America.' I had no idea where it was -- I had to look on a map! Started to save my money. At the time there were only two major cooking schools in the country, the CIA and Johnson & Wales, but as a fifteen-year-old you're going to listen to your guidance counselor. It was the best advice I've received."

Thirty years after graduating from the Hyde Park, New York, school, Colosimo has no plans to leave the kitchen anytime soon. "I've been in the business my entire career. I don't plan on making any changes," he says. "If I was going to do that, it would have been 25 years ago. It's a business that i feel very comfortable with. I'm going to continue to do what I do for the foreseeable future until retirement."

Not that he completely abandoned his secondary travel-based career. After graduating in 1980, Colosimo moved to Miami on the advice of his culinary-school roommate and landed a job cooking on cruise ships. "When I started with Holland America, I was one of only a few Americans on the staff. It was seven days a week, breakfast, lunch and dinner, every day for six months at a time."

The experience gave the northwestern Pennsylvania native a new perspective on food and service. "Being the only American, working with a lot of European chefs -- at the time you didn't have people wanting and willing to work the long hours. From a culinary viewpoint, America was just starting to take off, becoming the nation that we are with food quality. It was like, 'You're just a bunch of hamburgers and steam-table cookery. Some of that is justified, but now that tide has turned and there's a different viewpoint from the European side toward American chefs.

"Fortunately we [American chefs] aren't locked into some of those traditional areas, where 'this is how you make something.' Because we have an open book with all the nationalities we're cooking with, we're not locked into certain styles of cooking. We can take the best from everyone, whether it's northern Europe, southern Europe, Asia, Africa, South America. It's fantastic that you can take all those specific ingredients."

Colosimo spent 25 years in the cruise industry, first with the giant oceangoing vessels, then with St. Louis-based Clipper Cruise Line, which chartered yacht cruises for 100 passengers to sites along the American shores. There he met Paul and Wendy Hamiltion. "Paul was the director of operations for the front of the house. I was director of food service. We worked as a team. Wendy was a stewardess onboard. They met and got married, and they always had the aspiration of opening their own place."

The Hamiltons left Clipper and settled in St. Louis, where they opened Eleven Eleven Mississippi in 2003.

Colosimo stuck it out aboard the yachts for a few years longer but closely followed his friends' progress with Eleven Eleven Mississippi, Vin de Set, and Moulin. "I would come over, and they'd show us the designs of [Eleven Eleven Mississippi], and it was nice to follow that step by step. And then on opening day, being able to be back in the kitchen, just helping him out. I just wanted to be here to help." In 2008 Paul Hamilton was looking for a general manager and Colosimo took the seemingly predestined next step.

"Chef Ivy [Magruder], Paul, Wendy -- the people who helped found the place set up a good base. It's my responsibility to maintain that and improve on it. I was fortunate to walk into a well-oiled machine, and I'm here to make sure it stays well oiled and not break it down."

The transition from cruise line to landlocked restaurant came naturally, with Colosimo and Hamilton using the customer-service skills they'd honed in the close quarters aboard ship.

"We were always in front of the guests," Colosimo explains. "It was a small ship. You'd get to know them over a seven- to ten-day period, and sometimes you wanted the trip to be over sooner than it was, but most of the time it was a buildup of friendships: We hope to sail with you again; we hope to see you again."

Guests' expectations play a big role in the service Colosimo aims to provide: "We know our regular guests, and we know what they're going to order. That anticipation -- we try to make that happen. There's a couple that always wants a certain kind of fish and a sauce I only keep on the menu in the summer. We've built up a relationship where they tell me when they're coming and I'll make that for them. It's nice seeing those people week in, week out. It's sincere. It's not fake. You sense that."

While they aim for a restaurant that feels like home, Colosimo and the Hamiltons haven't abandoned their travel roots. In September they set out with their families on a trip to Tuscany, sharing the experiences on the restaurant's blog. It wasn't just a vacation; it was a chance to reacquaint themselves with some of the best comfort dining in the world.

"It's a very simple approach to their food: Don't overcomplicate things. Sometimes we tend to want to add too many things to an ingredient because it's not good enough. The steak fiorentina -- it's a T-bone steak, grilled perfectly, sea salt, black pepper, high-quality olive oil and maybe a little bit of rosemary infused into it. That's it. We tend to want to put five more ingredients into it. That's where the restraint has to come into play, from a chef's standpoint. But finding the greatest ingredients to put in those particular dishes, that's what I'm working towards. We try to put that influence into our menus."

He also listens to his staff.

"Of course every day we let the servers taste [the specials]. And they're brutally honest. They'll say if it's too bland, and we'll customize it. We'll take some of their comments because they're a good gauge. They're in front of the guests.

"My role here is general manager and executive chef. I know certain chefs who hide behind the ranges, yelling and screaming. We try to have one cohesive unit instead of 'front of the house' and 'back of the house.' It's an open kitchen. I tell them that if they want to be a yelling, screaming, cursing chef, then stay in New York."