Beer, cheese and potatoes. If these three food items don't take up 60 percent of your "Five Favorite Things in Life" list, then we don't want to know you. (That still leaves two slots for your significant other and your cat, so don't say our selections take up too much room.)
Perhaps not coincidentally, beer, cheese and potatoes are the three vital elements of that rarest of gustatory pleasures: Welsh rarebit.
Sounds like the makings of a FIGHT CLUB SANDWICH!
But who should the contenders be? The Central West End boasts two Welsh pubs of great renown, both of which claim to serve authentic rarebit -- but let's spice it up a little, shall we? Why not make this a cage match FCS and throw another contender into the ring! Newstead Tower Public House, a gastropub known for its outstanding burgers and locally sourced ingredients, serves as our wild card in this battle royale of beer cheese dips.
We want a good, clean fight.... Let the rarebit rassle begin!
THE CONTENDERS
Llywelyn's Pub 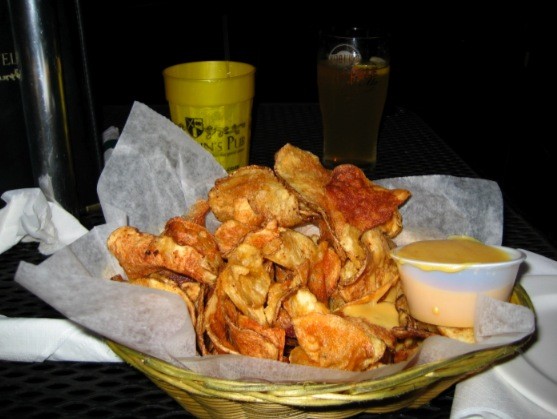 Llywelyn's dip arrived in a small plastic cup perched precariously atop of a full basket of potato chips ($3.95 for an order of pub chips, $1.59 for a side of rarebit). The chips were house made and nicely crisped, but they did not appear to have been fried to order. Which is to say they arrived at the table stone cold.

We opted for the pommes frites ($5), of course, which comes with sides of both vinegar and aioli. The rarebit ($2.50) was brought in its own little tin cup alongside the aioli.
You can taste both the sharp cheddar and the beery components in the rarebit, and it does a great job cutting the saltiness of the fries. On its own Newstead's rarebit is great, if more beery than cheesy.
The problem, however, comes in comparison. Next to the aioli and the vinegar, the rarebit fails to stand out, unlike other renditions that we would gladly eat off our fingers if it was polite to forgo chips in public. It must be said: When placed alongside other condiments, Newstead's rarebit somewhat less than holds its own.
THE WINNER
Dressel's, by a landslide. The chips are perfection, and the rarebit itself is good enough to eat on its own, and if it happens to be an off-night for the kitchen, well, there's enough beer in the building to make you forget all about it.
Llywelyn's Pub (Central West End)
4747 McPherson Avenue; 314-361-3003
www.llywelynspub.com
Dressel's
419 North Euclid Avenue; 314-361-1060
www.dresselspublichouse.com
Newstead Tower Public House
4353 Manchester Avenue; 314-535-7771
www.newsteadtowerpub.com