With Halloween right around the corner, we've had horror movies on the brain. And then we started coming across some awesome Halloween-themed cupcakes. What could be better, we thought, than a double-barreled approach: the best Halloween cupcakes paired with the best movies to watch while eating them!

Without further ado, our findings:

12. The Werewolf Long before that Team Jacob dude flexed his abs and howled at the moon, werewolves were scaring the bejeezus out of people. The werewolf is a pillar of the horror-movie pantheon, and this cupcake is the perfect way to kick off this countdown. Suggested cinematic pairing: The Howling

11. Bloody Brains Lobotomy, anyone? Okay, so this ain't the most appetizing-looking 'cake. But true Halloween and horror buffs can't help but love its gross, oozing goodness. Suggested cinematic pairing: Hannibal 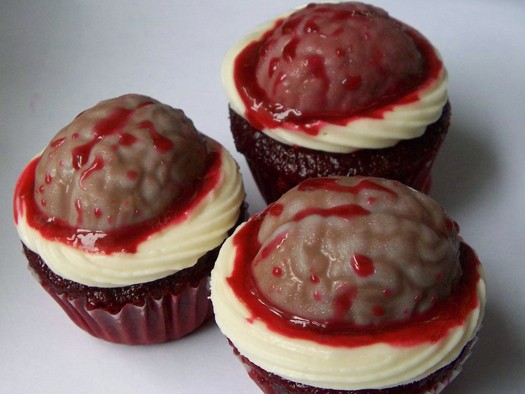 10. Raw, Cadaverous Brains Brains...brains...brains!! This is the perfect cupcake for a zombie with a sweet tooth -- and exceptionally well-crafted! Suggested cinematic pairing: Return of the Living Dead

9. From the Grave To complete the zombie hat trick, check out these unruly corpses that refuse to lie down and die. Remember: They may be coming to get you, Barbra, but this time you can bite back. Suggested cinematic pairing: Night of the Living Dead

8. Funky Demon No Halloween or horror-themed list would be complete without some ridiculous-looking creature of the night. Suggested cinematic pairing: Night of the Demons 2

7. Spiders No creature packs as much fright per milligram as these creepy crawlers. Suggested cinematic pairing: Arachnophobia

6. Killer Sharks Insert Jaws theme here. Seriously, this film was so terrifying that some people have felt the tingle of fear as they've stepped into a swimming pool. That movie broke people. Suggested cinematic pairing: Jaws -- what else?

5. The Eyeball If you want to see one of the most disgusting eyeball scenes in movie history, then check out our suggested film. Otherwise, simply enjoy a bite of this ocular delight. Suggested cinematic pairing: Phantom of the Mall: Eric's Revenge

4. Witches Halloween is truly a holiday for all ages. So, here's one for the family to enjoy. Suggested cinematic pairing: The Wizard of Oz

3. Brain Slugs Nothing says dessert like a fat, green parasitic slug that locks onto the head of its host and assumes total control. This way, though, we get to suck on its brains. Suggested cinematic pairing: Futurama, duh.

2. Bloody Butcher Knife Whether we're talking Norman Bates or Michael Myers, the butcher knife sticks out as one of the most iconic weapons in horror movie history. Suggested cinematic pairing: Halloween 1 and 2 (John Carpenter, not Rob Zombie)

1. The Evil Dead Seriously, this is the greatest thing ever. OK, so maybe the quality isn't as high as some of the other cupcakes on this list, but that's the way an Evil Dead cupcake should be. Similarly, Raimi's masterpiece may not look pretty, but it sure is fun. Odds are these cupcakes taste awesome, even if they won't win a beauty contest. And if you don't like it, perhaps you'd prefer a taste of boomstick. Suggested cinematic pairing: C'mon! This should be a no-brainer!

Honorable Mention: The Michael Myers Cake A Halloween Halloween Cake. Sure, it's not a cupcake, but it's awesome.