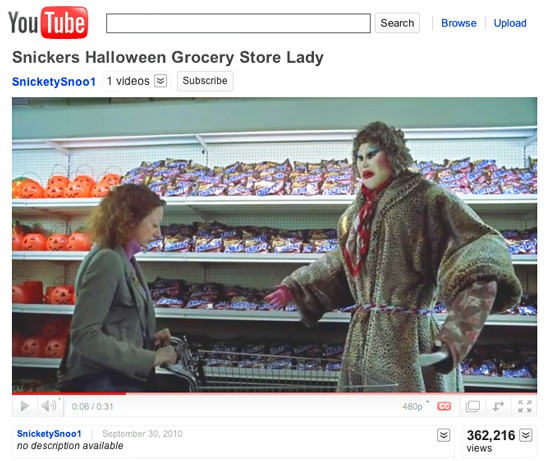 In an era when advertisements are so easily evaded by consumers, a TV commercial going viral is an agency's dream: "Grocery Store Lady," Snickers' first-ever Halloween-themed ad, created by New York-based BBDO Worldwide, has spooked its way onto high-traffic websites including BuzzFeed, Huffington Post and Consumerist, and it's leaving loads of "WTF?" comments in its caramel-laced wake.

The 30-second ad's action is straightforward enough. While meandering down the candy aisle, an innocent shopper is accosted by a Halloween-costumed figure who bears more than a passing resemblance to the late André the Giant and who proceeds to throw mass quantities of Snickers bars into the frightened victim's cart. Between the figure's severe mask (which might have been stolen from a Japanese Noh theater prop room) and its warbly voice -- not to mention the far-too-personal face caress perpetrated on poor Mrs. Jensen -- "Grocery Store Lady" takes an undeniably out-of-the-box approach to candy-bar shilling.

"'Old Lady' In Snickers Halloween Commercial Is The Creepiest," echoed Huffington Post, adding in the body of the blurb:

"...[I]t's the creepiest thing we've ever seen. The ending is definitely funny -- and we'd give props to any kids clever enough to pull this off for real -- but that 'old lady' is one of the scariest things we've ever seen."

Some viewers suspected there was more to it than that, even going so far as detecting a pervy undercurrent. While the ad appears to suggest that Grocery Store Lady's massive faux-fur housecoat is inhabited by a pair of Snickers-mad kids, the footage itself reveals only one rug rat, who emerges at the end from the crotch of the costume like some hallucinatory vision of childbirth to announce, "We're definitely goin' to her house." All you see of the upper half are its eyes; all you hear is an admonition to the lower half to "Sssshhh!"

So who is in there? A kid? A grown-up? And is the ambiguity all part of BBDO's intent? 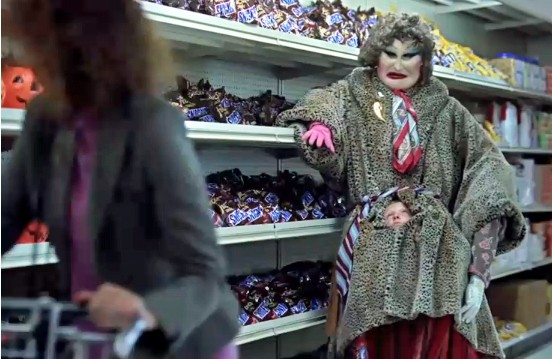 The ad is geared toward moms who "want to impress during Halloween and provide the best costumes, candy and hospitality," Nodzak writes. "We developed the dedicated Halloween spot as a creative way to remind moms that Snickers is the chocolate candy that everyone asks for during the Halloween season."

Nodzak goes on to sidestep all the good stuff we asked -- the nougat of the matter, so to speak -- namely: What the heck's up with the shushing, shadowy figure up top that's even scarier than the Jocelyn Wildenstein-inspired mask that covers his or her face?

"We are always excited when one of our ads becomes popular online and creates buzz for the brand," Nodzak blithely dodges. "Seeing the spot pick up momentum online demonstrates how the ad is connecting with consumers."

Unlike Snickers, the flack's answer fails to really satisfy.