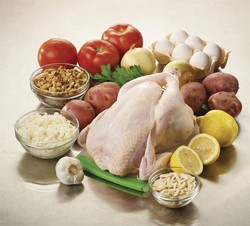 To complement Brooke Foster's feature this week, "Tastes Like Chicken: An RFT Food Experiment," we are pleased to bring you the video version of events.

For this unique gustatory exploration, we divvied ourselves up into four teams, each of which went shopping in a different location: the Hampton Village Schnucks, the Whole Foods Market in Brentwood, the Pete's Shur-Sav on Olive Boulevard in University City and the Tower Grove Farmers' Market.

Each team went armed with exactly the same menu, recipes and shopping list, empowered to make substitutions on the fly if necessary. Then on Saturday afternoon, the gang convened, one group at a time, to cook up their bounty at our base of operations for the experiment: the way-too-well-equipped-for-the-likes-of-us-(and-probably-you) kitchen/photo studio of local photographer Steve Adams.

The other guy who was gonna be sorry was popular local sauté pan slinger John Perkins, a.k.a. the Clandestine Chef, whose underground dinners, whipped up under the nom-de-guerre Entre:Underground, are rapidly becoming the stuff of local legend. Somehow, author and experiment coordinator Brooke Foster persuaded Perkins not only to create the menu, grocery list, recipes and instructions, but also to mentor the RFT chefs through the process of turning raw ingredients into dinner -- or some semblance thereof. Though it remains unclear how Foster duped Perkins into taking part, she almost certainly did not inform the chef that many of his charges hadn't the slightest idea how to make their way around the kitchen, much less execute more challenging tasks, such as, say, boiling an egg.

Following a seven-hour marathon of misadventures), the food experiment (and the evening) culminated with a full-on banquet at which the participants got the chance to taste the fruits of their labor.

And copious amounts of beer and wine. (Um, better make that "And whatever was left of the booze that had been acquired for the day's activities.")

For more photos from the cook-a-thon, click here for the entire Behind the Scenes of Tastes Like Chicken slideshow.

In the Kitchen St. Louis Scenes