Welcome to Girl Walks into a Bar, a weekly Gut Check feature that spotlights local bars and bartenders. This week Alissa Nelson profiles Flamingo Bowl bartender Katie Gwaltney. Below is a Q&A with Gwaltney, followed by a video of her mixing a Spiced Chocolate Martini. It has become apparent that Joe Edwards is running a cult.

The Loop's greatest champion, impresario of urban reinvestment and curator of kitsch inspires an almost maniacal devotion in his employees.

Take Katie Gwaltney, bartender at Edwards' Washington Avenue venture, Flamingo Bowl: "He is the best boss I think I've ever had. He's awesome," gushes Gwaltney, who has been working at Flamingo since the bowling lounge opened in 2007, beginning as a bar back and quickly moving up to her current role as assistant manager. Prior to that, she was a server at Blueberry Hill, where she was initiated into the ranks of Edwards devotees.

After work she'd head to Pin Up Bowl, whose 3 a.m. liquor license makes it a magnet for many Delmar Loop service workers. It was her affection for Pin Up that led her downtown to Flamingo. Adding to the immersion in the Edwards environment, Gwaltney lives in a building completely populated by night-owl bartenders, including James Lake (he of the Edwards-owned Eclipse).

Gwaltney is an ideal Joe-postle: friendly and energetic, with a sunny attitude. (The ample tattoos don't hurt.) The staff here right now is awesome," she says of her Flamingo co-workers. "I love everyone who works here."

Click through for the Q&A and a video of Gwaltney mixing a Spiced Chocolate Martini...

In three words, how would you describe your bartending style? Sugar, spice and everything nice. 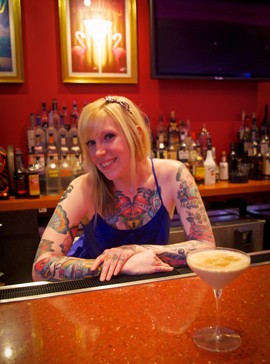 Favorite drink to make? Bloody marys. I make bloody marys super-super-spicy, and I add all kinds of weird things to them.

What is the worst drink you've ever had? It's a shot called the '57 Thunderbird with Florida License Plates. A couple of the staff members had shot books to look through and we made it. It's just the gnarliest thing you'll ever have. It's Myers's rum, Grand Marnier, pineapple juice and grapefruit juice. It's...disgusting.

What do you drink when you're...on a plane? Vodka clubs.

...Trying to get drunk? Straight shots. Don't even mess around with the drinks.

Worst/best thing you've ever seen happen in your bar? Anytime anyone gets sick, that's never good. Anytime that happens it's the down point of the night. Everyone gets bummed, especially the person that has to clean it up. Best thing: Brett Michaels filmed a segment of Rock of Love here, and I love Poison so that was one of the few day shifts I've worked here.

How do you keep yourself occupied on a slow night? Drink.

Who would you most like to have a drink with? Stephanie James. That's my best friend.

Where are you most likely to be found when you're not in this bar? Blueberry Hill. That's my favorite bar.

Most unusual liquor you've ever seen? Bacon-flavored vodka. It's okay in bloody marys, but I haven't found anything else to put it in.

If you could start a band, what kind of band would you start? Female Elvis impersonator.

Best/worst drinking holiday? Worst holiday is going to be the night before Thanksgiving. I call it amateur night. Everybody's in town with their families and it's just a mess. My favorite is Halloween, because you get to dress up.

Biggest tab you've ever seen? Probably the upper $200s for a single person without any friends along.

Three adjectives that describe your bar. Unique, spectacular and entertaining.

My bar is the only bar in St. Louis where... The party is.