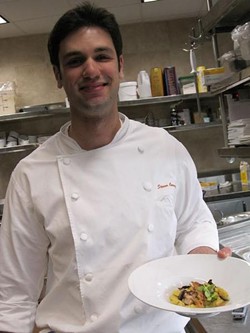 Steven Caravelli took over as executive chef at Araka (131 Carondelet Plaza, 314-725-6667) last month. Now he has unveiled his new menu for the Clayton restaurant.

"The formula is the same: small plates, flatbreads, salads, soups and entrées," Caravelli explains. "I pretty much changed over 90% of the [specific] dishes."

Caravelli hopes to bring to Araka the experience and techniques that he learned working for such noted chefs as Hubert Keller of Sleek (where Caravelli was executive chef), Larry Forgione of An American Place and Gerard Craft of Niche. The overall goal, Caravelli explains is, "taking Araka the next step: refining the cuisine."