Welcome to Girl Walks into a Bar, a weekly Gut Check feature that spotlights local bars and bartenders. This week Alissa Nelson profiles Double D Lounge bartender Tanner Scott. Below is a Q&A with Scott, followed by a video of him mixing a Creamsicle cocktail. 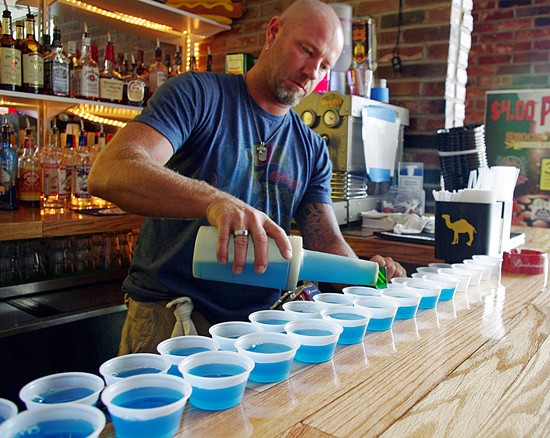 "Me and rules don't get along very well," says Tanner Scott. Sounds about right, coming from a man who works at one of St. Louis' premier karaoke bars and doesn't like karaoke. But even though his love of motorcycles might lead you to believe otherwise, he's no outlaw loner à la The Wild One. Spend some time across the bar from him at the Double D Lounge and Scott comes off as an amiable dude, respectful of his customers without being ingratiating, and expecting their respect in return.

It's an attitude that has served him well over his twenty years of bartending. Scott got his first taste in Dallas (where he grew up), as a bar back at a sports bar called Christie's. (Years later during a Texas sojourn RFT's sister paper the Dallas Observer deemed him one of the city's best bartenders.) Bartending provided cash when he was a volleyball-playing business student at USC UCLA, and he has worked for stretches on cruise ships and at resorts.

Scott came to St. Louis as purchasing manager for P.F. Chang's China Bistro, and he quickly discovered the Double D. "Double D was the very first bar I set foot in when I came to St. Louis, looking for a little watering pub", he recalls. "Double D was right across the street, I walked in and met [owners -- hence the bar's name] Dick and Donna on night one and just fell in love with it."

His love for the place is apparent in the ease with which he navigates the bar. The clientele suits him: genial and laidback, with a healthy dose of grit.

Click through for a Q&A with Scott and a video of him mixing a Creamsicle...

Favorite drink to drink? Glenlivet on the rocks.

Favorite drink to make? Anything with one ingredient.

Drink you hate making? Not really. Layered drinks are a pain in the butt sometimes, since it's takes a certain skill.

What makes you ignore a customer at the bar? If you're a douchebag. But fortunately I work for a mom-and-pop where I can't ignore you. The only things that annoy me are "hey" and "yo." If you say "hey," then I'll come up to you and say [holds out hand], "I'm sorry, my name is Yo." If somebody's going "Yo! Yo!" I'll say, "I'm sorry, the name's Hey."

Can you spot trouble as soon as it walks through your door? Not all the time. Definitely when there's a Cardinals home game. They start rolling in at 10:30 or 11 p.m., and typically they've had a few cocktails.

Best/worst song on the jukebox? I've got two that I absolutely despise, and every time they come on -- and they come on every night -- my regulars look at me and laugh. I cannot stand Miley Cyrus' "Party in the U.S.A.," and I cannot stand that damn Journey song that everybody sings.

Worst/best thing you've ever seen happen in your bar? I think one of the best things that's happened is that I have seen four people meet and get married here. You don't see that in most bars. Worst thing: It's never a good thing when we have fights.

Who would you most like to have a drink with? Shannon Hoon [the late lead Blind Melon vocalist]. My favorite band on the planet and I think he's one of the greatest writers of all time.

Where are you most likely to be found when you're not in this bar? Sports Attic.

Best hangover cure? Hair of the dog. Or date a nurse. IVs are amazing.

Worst pickup line you've ever heard? I think one of the worst ones -- and I hear it a lot -- is, "How do you like your eggs?"

Most unusual liquor you've ever seen? Damiana. The bottle looks like a Buddha.

If you could start a band, what kind of band would you start? Definitely a Milli Vanilli tribute band. I can't sing, so you might as well lip-synch it.

Biggest tab you've ever seen? Mark Cuban owns the Dallas Mavericks. One of his star players, Dirk Nowitzki, had his birthday in my sports bar, Christie's, and their tab was just over $5,000.

Drunk food of choice? Either ramen noodles or Jack in the Box egg rolls.

My bar is the only bar in St. Louis where... You can sing karaoke, get cheap drinks and get laid all at the same time.