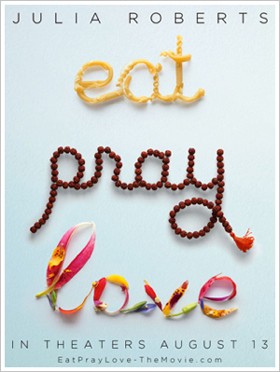 Surely you jest, WXII-TV in Winston-Salem, North Carolina. The piece you ran about Eat Pray Love-themed weddings seemed like a joke. But when we hit the part about including the bachelor party in the overarching theme of a middle-aged navel-gazer's big adventure, it began to dawn on us that you might be serious.

In which case, as Friend of Gut Check Jay Jernigan notes, "If the groom agrees, bride = beard."

Far be it from us to question one's sexuality based on an agreement to go along with a bachelor party that features the food and decor from Italy, India and Indonesia. But really. Do you know any guys who are going to tell their friends, "Hey! Come to my Eat Pray Love-themed bachelor party!"

Translation: "Hey! We'd really like to have your severed testicles as a wedding gift!"

Part of the fun of a party is matching the food and themes to the participants. Surely there are movies that inspire nosh and drink ideas better suited to most fellas that don't feature enlightenment and Julia Roberts.

Truth be told, any of these ideas are applicable to bachelorette parties, too. Not every gal wants to mark her last unwedded night with mediation and gelato.

1) Fight Club There's no better way to buck a chick flick-inspired bachelor party than with this ultimate ode to reclaiming masculinity in a world where fathers have too often disappeared and boys are left with no Y chromosome role model.

As for party concepts, this one's pretty darn easy: drinks at a skeevy bar, discuss duvets, ask friends to hit the groom as hard as they can.

2) Reservoir Dogs Wear your finest matching suits to your favorite diner. Drink three cups of coffee instead of the six you want. Discuss song meanings over breakfast. Debate the moral obligations of tipping a server until asked to leave.

3) Star Wars One word: cantina. Unless you're a droid. But your big, hairy, incoherent friend shouldn't have a problem getting served.

4) The Godfather If you must consume Italian food during your bachelor party, there are much more manly ways to do it than the "no carb left behind" motto of that other movie. Do you think Don Corleone gave a fuck about how many pounds he put on? (Note: It's probably not a good idea to put a bullet in your best man's forehead.)

5) Scarface A groom can't live on blow alone. Have a Cubano and mojito with that white mountain.

6) Apocalypse Now Is there anything manlier than a Vietnam War epic? Of course not. Substitute the Balinese cuisine with a Vietnamese bahn mi sandwich. First jackass to utter "The horror! The horror!" regarding the bride gets his head on a pike.

7) Rocky A night of raw eggs and keg tossing will make for beautiful wedding photos the next day.

8) Blazing Saddles Celebrate the manly Old West with a healthy bean pot and farting follies. It's no worse than what enough curry will do to your system.