America's Hottest Culinary Couple Might Be in University City

August 31, 2010 at 9:00 AM
comment
With two kids, two jobs and their cleancut Midwestern good looks, Dave and Dora Smith might look like the couple next door. But appearances can be deceiving: The Smith might also be (cue drumroll) the hottest culinary couple in America. 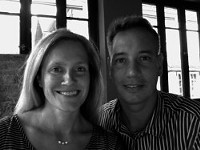 Who says? Pyrex says! The kitchenware company has been soliciting three-minute videos from couples across America, hoping to find "the couple who really sizzles in the kitchen." The St. Louis natives are among ten finalists.

In their video, which you can watch here (and vote on through Friday), the University City-based couple make a cheese fondue in a special pot that Dave's Swiss grandmother hauled over from Europe for their wedding. They also make the salad that they enjoyed on their first date -- an endive salad with pears.

In the video, however, they realize they've actually forgotten to buy pears.


Never mind; they let the camera keep rolling -- bringing a pleasant lack of pretension to the enterprise.

Indeed, the Smiths say they entered on a whim. They enjoy entertaining (their "fun-due parties are apparently famous in their circle, and they did a pig roast for Dave's fortieth birthday), but it took a friend to bring the contest to their attention.

"He kept telling us, 'You should think about this,' 'You should enter this,'" Dora says. We weren't sure how much Pyrex we had -- although when we looked into it, we realized we had quite a bit of it."

They decided to go for it during their lunch break one day, filming with a flip camera on the kitchen counter.

They laugh off the missing pears: "Every time we make that salad, we always forgot one ingredient," Dora says. "That's a regular story with us."

The winner gets $500 in Pyrex products, plus a fabulous $10,000. With so much at stake, it's not surprising that some of their competitors rely on sex appeal or gimmickry in their videos (yes, we're talking about you with the swim goggles, Mr. Peoria, Arizona).

But despite their low-key vibe, the Smiths might have a leg up: Dora actually works in social media. (You can check out her blog here).

"I tweeted it out," she admits, "and I did a blog post. It might come down to everyone's social networks." Or, perhaps, a bribe: If they win, Dora jokes, "we're going to throw a big party for everyone who votes for us."

But with two young boys and a rural retreat under construction in rural New Haven, Missouri, spending the money will clearly not be a problem. "It's already been spent," Dave says drily.

A note of trivia for St. Louis gourmands: the Smiths' first date was at Benton Park mainstay Frazer's, back when it was still Frazer's Traveling Brown Bag. They later enrolled in a cooking class at the Kitchen Conservatory taught by Frazer Cameron himself, Dave says, which is how they perfected the endive salad.

Presumably, under Cameron, they did it with pears.