Minor league baseball stadiums have some major league eats, and the Gateway Grizzlies in scenic Sauget, Illinois, have some of the best in the nation. Adam Richman of Man v. Food is a fan, so you know the eats must be over-the-top and worth the price of admission.

While Fight Club Sammie usually pits like foods against one another -- you know, apples to apples, pastrami to pastrami, whatever -- this time Gut Check paid a visit to GCS Ballpark to see which offering is the best of the best.

Baseball's Best Burger It goes by many names. Paula Deen calls her version the Lady's Brunch Burger. Others have dubbed it the Luther Burger in honor of the late, great stroke and coronary-prone Luther Vandross. It's the darling of this year's Wisconsin State Fair. Whatever it's called, the idea's the same: a bacon cheeseburger with a doughnut bun.

The Grizzlies' version takes a split Krispy Kreme and fire grills it before adding a quarter-pound beef patty, American cheese and bacon. Ingredient quality far surpasses that of most stadium foods. The bacon's crisp, the cheese gooey. The grilled Krispy Kreme interior's the real treat -- caramelized, yet with the softness we expect from the popular pastry.

But combined? One taster, while not displeased with the concoction, siad the sweetness overpowers the savory components.

A second taster opted to eat two, explaining, "I can't decide if I love it or hate it."

The double-taster has yet to succumb to vascular disease. 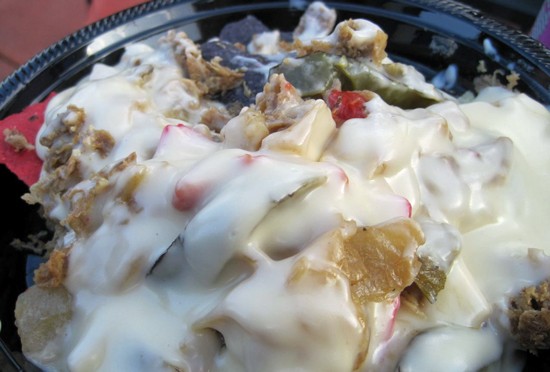 Baseball's Best Nachos Forget the stale little bags of round chips and orange cheese from a giant can. GCS Stadium concessionaires take their nacho inspiration from the East Coast with their Philly cheesesteak-inspired nachos. Richman digs them, having named them the second-best baseball stadium food in the nation.

Pile a plate with salty tortilla chips and top with shredded chicken, a creamy Monterey jack sauce with a texture that doesn't come from a can, tied together with grilled green and red peppers and onions.

Imagine the beautiful baby created from the unholy union between a Philly cheesesteak and a plate of sizzling chicken fajitas.

Every taster plowed into these -- even the vegetarians, who were able to omit the chicken from their order.

The freshness of the veggies and the smooth, tangy cheese sauce, grounded by the earthiness of slow-cooked, shredded chicken made for a complexity not usually associated with a pile of stuff-covered chips. 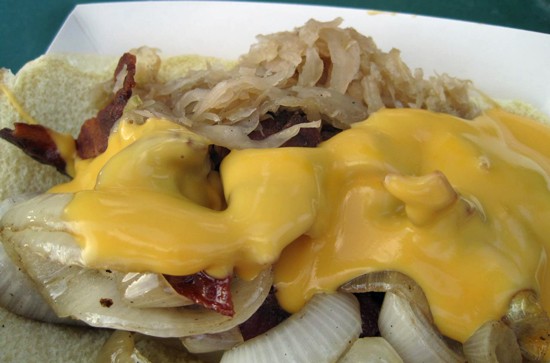 Baseball's Best Hot Dog Take one giant, juicy grilled frank, place it on a thick white bun and bury it in yellow nacho cheese sauce, sauerkraut, grilled onions and a few slices of crisp bacon and indeed, this might be the best hot dog that's combined with the American pastime. (And by pastime, we mean eating to the point of Lutherdom.)

A great combination -- again thanks to the quality of ingredients and the portioning. No single element overpowers any of the others, so it works. There's a balance of textures: toothsome frankfurter, with creamy, crisp and soft aspects from the accoutrements.

One has to wonder, though, why they opt for yellow nacho cheese instead of using the sublime white cheese that graces the nachos. Definite error.

The burger is eliminated in the first round of the playoffs. The hot dog is nearly perfect but undone by inferior cheese. Baseball's Best Nachos take the win for their balance, accessibility, fresh ingredients and complexity.