How Can KFC Top the Double Down? Not the Skinwich 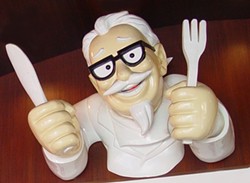 There was much hand-wringing and teeth-gnashing about the imminent food apocalypse when KFC introduced the Double Down, a "sandwich" of bacon, cheese and the "Colonel's Sauce" between two fried chicken breast pieces instead of bread.

(The result, Gut Check discovered, was more impressive in theory than in practice.)

How could KFC top this? My colleague Annie Zaleski passed along an item from a blog called Brain Residue. It seems in very select markets KFC is testing an item called...wait for it...the Skinwich.

I won't lie. The KFC association, not withstanding, I was tempted by this sandwich and hoped that it was true: fried chicken skin with bacon and American cheese. Crisp, hot chicken skin is a sublime pleasure, and as a fan of tacos stuffed with chicharrones, I'm in no place to judge the Skinwich.

Sadly, though, mere seconds after I posted the original version of this, a colleague informed me our sister paper the Village Voice had reported that the Skinwich is a hoax.

News of the World WTF?