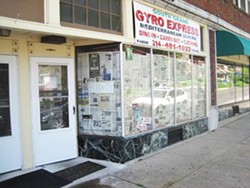 I reported in June that South Grand Gyro Express had closed "for renovations until further notice." At the time of that story, newspaper covered the  windows. Driving by its address at 5622 South Grand Boulevard, I saw that the newspaper was down, so I stopped to see what, if anything, was happening.

The restaurant was unoccupied at the time, but it appears as if renovation work is underway. I don't know yet whether the original owner is still involved, but the original phone number is now disconnected, which suggests that there might be a new owner. More as I learn it.