Interview with Anthony Bourdain: "I Wonder Sometimes If I'm a Malevolent Force" 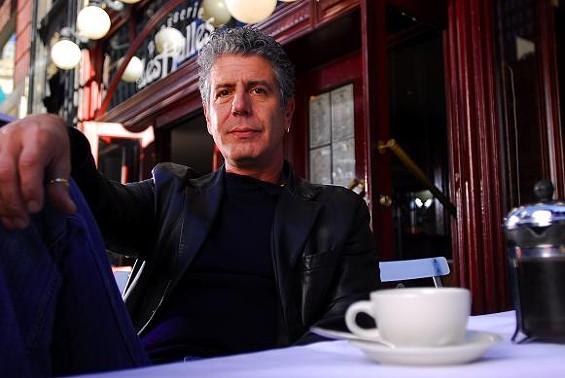 "I'm gonna walk out on stage, talk for an hour, [do] question-and-answer," says Anthony Bourdain of his October 1 appearance at the Fox Theatre. "It's as crazy, as rowdy, as entertaining as the audience cares to make it."

The visit will be Bourdain's first to St. Louis since a book tour in 2001. "I remember going out drinking with a bunch of chefs," he recalls. "I remember liking the chefs I met."

The chef turned author and television host is touring behind his latest book, Medium Raw: A Bloody Valentine to the World of Food and the People Who Cook, a sequel to Kitchen Confidential, the memoir-exposé that transformed him from the executive chef at Les Halles in New York City into one of the biggest stars in the culinary world.

Like Kitchen Confidential, Medium Raw overflows with Bourdain's opinions -- incisive, hilarious and profane in equal measure -- on the world of food. His trademark scorn finds plump targets: Alice Waters is targeted for her self-righteousness, and a chapter titled "Alan Richman Is a Douchebag" concludes that the GQ critic, who attacked New Orleans' reputation as a great restaurant town not long after Katrina hit, is not merely a douchebag but instead worthy of perhaps the most profane epithet in American English.

Bourdain finds new heroes, too, like Momofuku chef David Chang, and his skills as a reporter have grown immeasurably. Two of the better chapters in the book are profiles of a chef who lost during the early rounds of Top Chef and the fish butcher at seafood mecca Le Bernardin.

Unlike Kitchen Confidential, however, Bourdain now writes from the perspective of an outsider. He hasn't worked in a kitchen for the better part of a decade, and thanks to 100-plus episodes of his Travel Channel show No Reservations, he has seen more of the world than most. It is no coincidence that the first chapter of Medium Raw is titled "Selling Out."

"I have to beware to keep myself from becoming jaded," Bourdain says. "I've been traveling all around the world. Eating one week in China, Brazil, Spain. I know a lot of chefs, I eat regularly in really good restaurants, [I find myself] in pretty wild, extreme rural situations, exotic situations. Once you've had the really spicy food in Szechuan province, you refine [what spicy means]."

A melancholy tone flits through Medium Raw. In the chapter "Meat," Bourdain wonders whether seemingly positive trends like chefs and diners alike insisting on "happier" meat and embracing organ meats and other traditional foodways have a downside. He writes, "Am I helping, once again, to kill the things I love?" This idea of killing the things you love recurs.

"I think if you fetishize certain simple good things long enough, loud enough, you become part of the process of diminishing suppply and increasing demand," Bourdain explains. "If you're fetishizing an organic peach, you're certainly helping to raise the price of it.

"By the same token, celebrating simple food that used to be the province of the poor as some sort of exciting thing for comfortable, well-off people, you're changing something that used to be a birthright.

"My job and my passion is to find and celebrate these little out of the way food stalls in remote parts of the world, yet by putting them on TV, I'm changing their very nature. You go back now, they've moved, they're twice as big.

"I wonder sometimes if I'm a malevolent force."

(In the episode of No Reservations that premiered the same day as this interview, Bourdain cheekily refuses to name a restaurant in Rome where he is blown away by the pasta, again citing his fear of killing what he loves.)

A similar strain of self-criticism is evident in Bourdain's relatively gentle treatment in Medium Raw of one of his favorite targets: Rachael Ray, Sandra Lee and other Food Network stars. He reveals that he won't make fun of Ray after she sent him a fruit basket, and he is the butt of the joke in a story about running into Lee at an event.

In part, this is smart politics, as the parent company of the Food Network recently purchased the Travel Channel (though the only person Bourdain savages as fiercely as Alan Richman is Brooke Johnson, the Food Network executive who he accuses of dumbing down the network). In part, it is acceptance of how the food world operates now.

"Food personalities -- I put Rachael Ray and Paula Deen in this category -- I don't know that it matters that they cook. [Viewers] see someone they like, and they want to spend time with. I don't think anyone cares if Guy Fieri cooks. It makes people feel better about themselves and the world."

As for Bourdain's own show, the sixth season of No Reservations is currently airing, and he begins shooting the seventh season soon. Among the planned locations for the next season are the Congo, Haiti, Japan, Cambodia, China, Brazil and Nicaragua.

Bourdain is also slated to live in Vietnam with his wife and daughter for an entire year and write a book about the experience. Bourdain, laughing, cautions that this project is dependent on his No Reservations schedule: "If they ever cancel the damn show!"