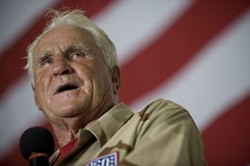 Hall of Fame NFL coach Don Shula will open a branch of his Shula's 347 Grill at 411 North 8th Street in the new Roberts Tower downtown. The restaurant, named for the former Baltimore Colts and Miami Dolphins coach's total number of career victories, is slated for a late October or early November opening.

There are locations of Shula's 347 Grill in Atlanta, Fort Worth, Philadelphia and a half-dozen other cities. The menu features sandwiches, burgers, seafood and steaks. Take a gander at the website of the Atlanta Shula's 347 Grill for a sneak preview of that menu and the look of the place.