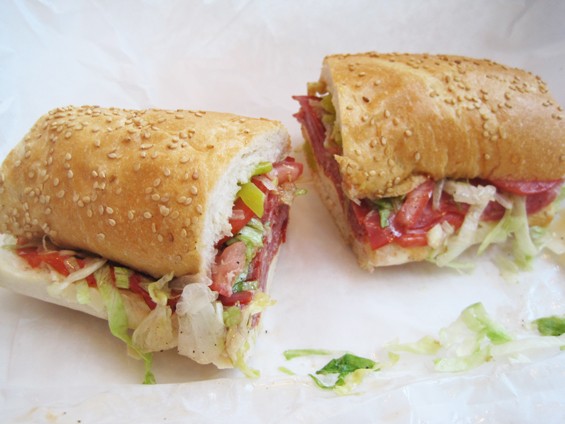 One o'clock on a Friday afternoon and the line at Blues City Deli stretches out the door onto the sidewalk. There are cops and office workers, dudes with blond dreadlocks and intricate tribal tattoos -- and hey! there's Mike Sweeney of STL Hops.

Everyone, it seems, loves Blues City Deli. I'm no exception.

My pick is the #2, the "7th Street Sicilian" Po' Boy: a thick stack of Genoa salami, pepperoni and capicola topped with a slice of Provel cheese, lettuce, tomato, onion, pickle (if you swing that way; I don't and begged that it be omitted) and pepperoncini, dressed with vinegar and oil and served on a seeded baguette. Of course, you can hardly go wrong with that combo of cold cuts, but the baguette is this sandwich's secret weapon: crusty, chewy, with actual flavor.

And, yeah, the cheese is Provel, making its first and almost certainly only appearance on this list. That, my friends, is the power of Blues City Deli.