July 27, 2010 at 1:00 PM
comment
Last week Regretsy, the website that culls online mega craft show Etsy for the worst handmade goods -- "Handmade? It looks like you made it with your feet." -- featured an art photo they dubbed "Shit Sandwich."

The artist, unimpressed with a sandwich she'd ordered, reconstructed her leftovers, took a photo that would be sub-par by Urbanspoon standards, tacked on a loquacious description and is trying to sell it. 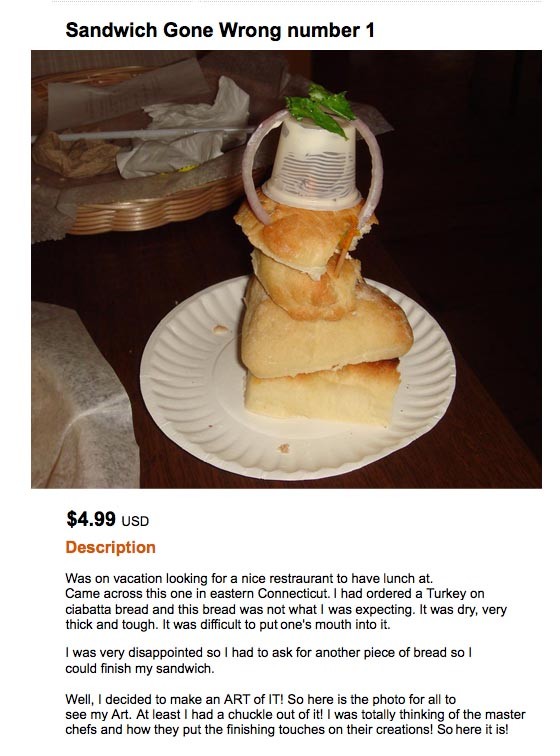 Which led us to wonder: What are other crafters doing with food that they probably shouldn't? Lots of things. Lots of really odd things.

I Moustache You Hard Candy Lollipop 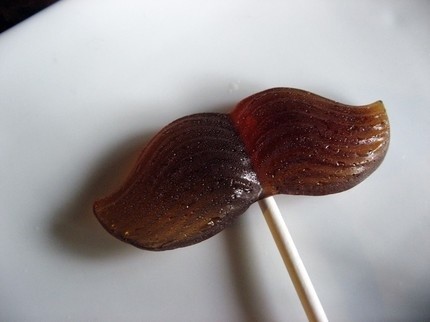 Is the mustache fad over yet? The only thing that would make this more hip would be if it were bacon-flavored. Don't worry -- it's not.

And what does "I moustache you" mean? That I can cram your whole pushbroom facial hair into my mouth and suck it off a stick? OK, so there's probably a market for that.

Haute couture? More like hot couture! These little replications of everyone's favorite Lenten fried minced-fish treat will have everyone screaming those words every fashionista lives to hear from the catwalk:

Gimme back that Filet o' Fish.
Gimme that fish.

And speaking of cats, they're going to love you for wearing these. So much so they might gnaw them right off your lobes.

Everyone's favorite caramel frozen sugar bomb from an undisclosed coffee franchise -- in miniature! Complete with wee green straw to serve as a placebo when the sugar and caffeine jones knocks and there isn't a nameless green coffeehouse with a blurred logo to be found.

Realistic food-shaped soaps aren't a great idea. Especially when the soap's shaped like a dish one might crave after being shoved into the shower to sober up. What's this delicious oregano smell? Why, the jackasses who liquored me up were kind enough to bring me a snack!

This is the worst pizza ever.

But how cool is it to vomit oregano-filled bubbles?

Your little Kewpie doll is just going to cram her feet into her mouth anyway. They might as well look like a food she won't be able to eat until her immune system is developed enough to fight anisakiasis.

This will never be used to get a good night's sleep.

This is intended for people with filthy fantasies about Hamburglar.

Slap some sushi booties on those kids and call it a fish fry! Perfect occasion to wear those Filet o' Fish earrings.

This message brought to you by Alton Brown and Cargill. Indoctrinate early and often!

Wear this ring, and be warned of hungry children biting your hand. But the plus side -- if you want to give this cheesy token to ask for a girl's hand in marriage, you can surprise her by hiding the ring in a Cheez-It box.

Anaphylaxis is not funny. Food allergies are not funny. Slapping a pin on your kid so that some well-mean snack pusher doesn't kill him is a pretty good idea.

But there's no need to emasculate. Hasn't the kid suffered enough?