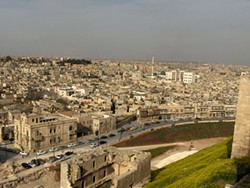 Welcome to Spice World, in which Gut Check looks at overlooked spices from around the world, introducing those you don't own but probably should.

History: Though its label says Turkey, Aleppo pepper takes its name from Syria's second largest city, located just south of the Turkish border. Aleppo was famed for being one of the last stops on the Silk Road, the main trade artery that connected Asia with Europe and Northern Africa some 2,000 years ago.

Though Aleppo, Syria, is regarded as one of the world's oldest continually populated cities, it gradually became a less important player in trade, its access to the rest of the world cut off first by sea and then by land. But its relative remoteness has resulted in a well-preserved city that's seen an upsurge in popularity in recent years, and its famed markets are again returning to the spotlight.

(Not to mention the Turkish spice markets that, yes, made an appearance on this season's The Bachelorette.)

Today: Visitors to Turkey report that Aleppo pepper is a condiment frequently found sitting on restaurants' tables. But here, the chile is commonly used as a substitute for crushed red pepper or paprika or as a rub for grilling.

Its appearance is similar to crushed red peppers too, except that it's a bit oily and has a red-orange sheen. Plus, Aleppo pepper doesn't contain seeds; its smoky ancho flavor ranks it just below chipotle peppers at 10,000 Scoville Units.

In Use: When used generously as a rub on a really crappy cut of steak (pictured), it has a depth that's not found in pizzeria-style crushed red pepper. In fact, it's almost enough to salvage a tough piece of meat bought (admittedly, on sale) for $3 a pound.

Good as it is, it's no miracle worker, but Aleppo pepper is certainly worth trying again on a nicer steak and would give tired chicken on the grill a nice lift with its smoldering summery heat.