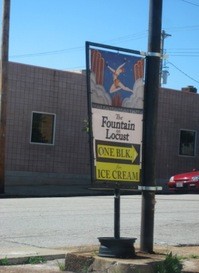 Owner Joy Christensen says a friend called her a few weeks back to say she'd seen the Fountain's bathroom featured in USA Today.
"They were talking about our designer mirrors or something," Christensen says. "So I was like, 'Oh, whoa!' I went back and checked, and it turns out this guy had e-mailed me with the news."
Click through to see the purported best potty in town and learn about Christensen's plan to put St. Louis back on the map, one toilet at a time.
Christensen says she hadn't heard of the contest, which is sponsored by Cintas Corp. At first she was worried about competing against big-money finalist commodes such as Mandalay Bay in Las Vegas and the Muse Hotel in New York.
"It's all this big deal, big money," she says. "Mandalay Bay has individual flat-screen TVs and fountains in their bathrooms! Ours isn't big-money, but it's something to see."

​The Fountain is equipped with two restrooms, one individual unit for men and women, and one two-stall number earmarked just for women. ("We didn't want the ladies to be deprived, like everywhere else in the world, so we gave them two bathrooms," Christensen explains.) Both are handpainted with Art Deco flourishes, the women-only bathroom pink with some fairy-thing blowing bubbles on the wall near the sink.
The bathrooms certainly are interesting to look at -- and, we're happy to report, very clean -- but don't head for the head expecting an extraordinary experience. No massage-by-the-minute, now complimentary puppies or mirrors that tell you how great you look as you wash up post-pee. You do, however, get to stare at a cool chandelier in the ladies-only, as well as feel like the new sheriff in town when you push through the saloon-style doors that grace the stalls.

Christensen now must persuade customers and friends to vote for the Fountain online, en masse. There's no cash or other prize for winning the contest, only the satisfaction of knowing you've got a damn fine bathroom.
It's such a coveted title; people really want it," Christensen says. "We have to come up with some kind of slogan, like Obama. 'Come for the commodes, stay for the ice cream!'"