The final results are in from South Africa, but here at Gut Check we've just whittled it down to the final four. (Is it significant that Spain's still in the running?) New Zealand checks in with another of its signature sauvignon blancs, while Spain brings a monastrell (better known by its French name, mourvèdre) from super-importer Jorge Ordoñez. Can the Kiwis continue to surprise at the low end of the price scale? Can Ordoñez tame monestrell while retaining its varietal character?

Next: Boy, are we ready to drink us some more wine! 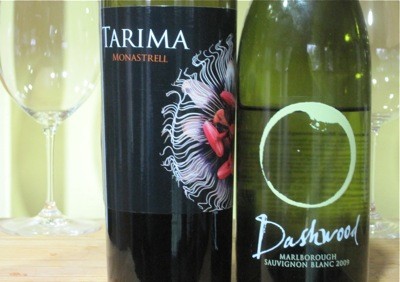 2009 Dashwood Sauvignon Blanc Marlborough New Zealand ($10) Its color is the only thing pale about this wine. Intense classic Kiwi sauvignon blanc aromas to be found here, fronted by raw chile pepper, guava, melon and herbs. This one manages to carry through the power to the flavor as well, which running your palate ragged from the initial pop to the long, tingly acidic finish. A great example of the kind of sauvignon blanc that put New Zealand on the wine map -- at a great price.

2009 Bodegas Tarima Monastrell Jumilla Spain ($9) The color's a clear light ruby, the scent fronted by dark, dense fruit, with whiffs of dry-aged beef, leaf mulch and tar. Translation: This wine definitely retains its mourvèdre character. Better still, unlike most of Ordonñez's wines, this one doesn't pop you in the snoot with a slab of oak. After that nasal introduction, the flavor's surprisingly restrained, while the tannins leave you feeling like you did when you had to stay after school and pound out the erasers at the chalkboard. A big wine at 15 percent alcohol, but wonderfully light on its feet. Quite nice for $9.

Tough luck for the Spanish here, as the monastrell was pretty good. Unfortunately, it ran up against a topnotch example of New Zealand's signature grape. While the Dashwood lacked some of the elegance of the Matua we tried way back in Round 1, it more than compensated with its exuberant personality. In the semis, you've got to bring your A-game and overachieve.