World Cuppage: Germany 4 - Argentina 0; A Blitzkrieg At the Amsterdam Tavern 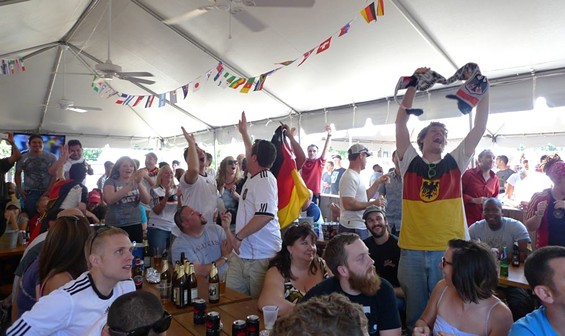 This was complete and utter destruction of the Argentinians by the Germans...and the majority of the crowd at the Amsterdam Tavern couldn't have been more pleased with the annihilation.

Still, there were a few blue and white striped jerseys in the house and the trash talking between the two sides (until somewhere shortly after goal number three) was among the best of the tournament thus far. Here's a recap of the events/atmosphere that should take six minutes or less to read; in other words, about as long as it took the Germans to score against Diego Maradona's squad. 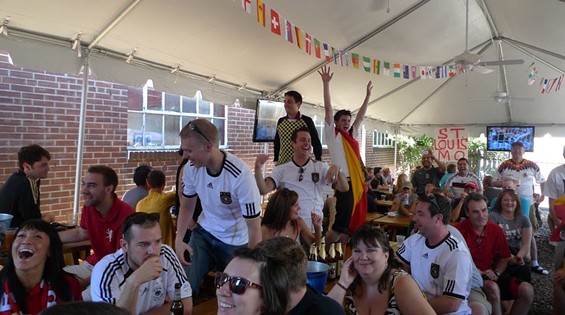 -Man of the Match: Random guy named Kevin. He came wearing a Bastian Schweinsteiger jersey with a German flag tied around the neck like a cape. He also had three different drinks in his hands and a ticket from the 2006 quarterfinal game between Argentina and Germany. And a referee's red/yellow card, which he flashed whenever there was anything remotely resembling a foul by Argentina.

-Best insult of the Germans by an Argentina fan: Random guy named Mike. By the end of the match, Mike earned the nickname "The Instigator." He wasn't so much an Argentina fan as a German provocateur. His best line was in reference to the fact that many of Germany's best players are immigrants from countries like Turkey, Poland and Russia.  "The only thing Germany is good at," Mike said. "Is importing Pols that can score goals." 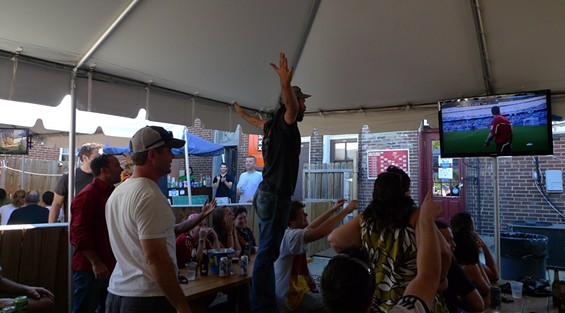 -Best insult of Argentina by a Germany fan: Random cigar smoker. "Argentina plays," he said."Like France smells." (It should be noted that he was totally oblivious or indifferent to the fact that his cigar completely reeked.

-Best insult of a bartender by a customer: One of the co-owners of the Amsterdam lives six months of the year in Germany working as a teacher and loves their national team nearly as much as the Americans. Regulars know this, and that lead to the following exchange:

Customer (referring to bartender's Argentina jersey): "What is wrong with you?" 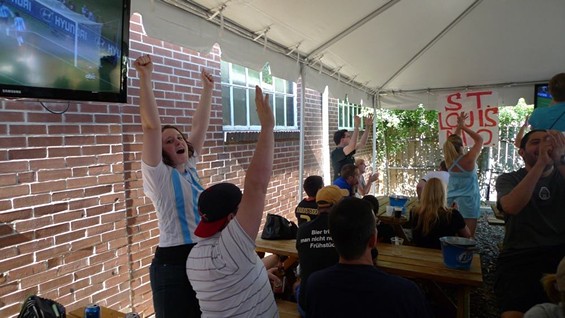 -Best decision by the Amsterdam's management: Serving sausage, egg and cheese breakfast sandwiches on croissants for $5 each. The last early morning match we attended they just had a box of glazed donuts to go with the freeze-dried Folger's coffee. This was a serious, and much appreciated, upgrade.