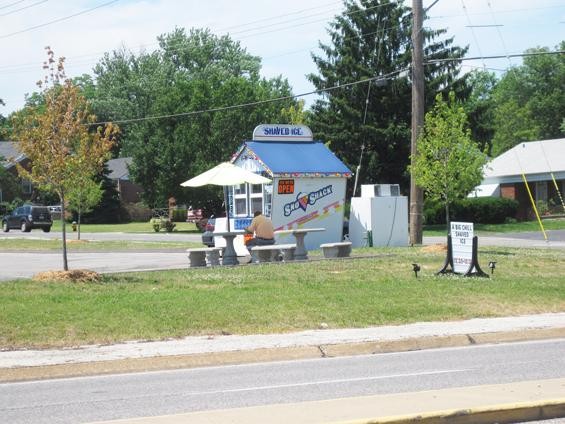 Ever since the dirigible accident that claimed his life, I have searched in vain for the head of my beloved uncle, Aeschylus Freeze.

It was Uncle Aeschylus who raised me after the death of my father, Dr. Freeze Sr., in the Snow Cone Air Drop Disaster of 1964. Uncle Aeschylus, too, was an aficionado of the snow cone, but if my father was Dionysus, attacking any and all snow cones with the ardor of a stud horse, then Uncle Aeschylus was Apollo, regarding each snow cone with a refined eye and unyielding standards of how ice should be shaved and syrup poured to elevate this frozen treat to a thing of sublime beauty.

Indeed, Uncle Aeschylus loved nothing more than to ask admittance to a snow-cone stand and study the workings of its ice-shaving machine, perhaps pointing how it could be recalibrated for a more delicate, snowflake-like result.

Alas, my uncle's mechanical expertise did not extend to dirigibles, and his homemade airship crashed shortly after its maiden launch into a neighbor's koi pond, killing my uncle (and a dozen koi) instantly. His body remained strapped into his cockpit seat. Yet where his head should be, a koi flapped feebly.

That head -- regal, even leonine -- we have never found.

Recently, a rumor reached me that Uncle Aeschylus' mistress, the Baroness Elba von Wiederhold had stolen his head and for nefarious reasons that I lack the heart to describe in this forum had had it cryogenically frozen until scientists learned how to reanimate it.

Would I find it at Essex Cryogenics in south St. Louis? Alas, no. In fact, I can definitively state -- and not simply because a court order compels me to do so -- that no human beings whatsoever are frozen at this facility. 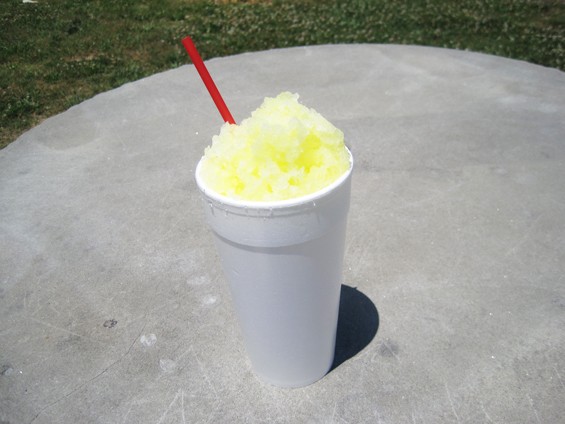 Wanting to salve my soul after another dead end, I stopped at Sno Shack, which is located just down the street from the cryogenics facility at the intersection of Heege and Mackenzie Roads.

Now, I have no doubt that the people at Sno Shack are passionate about the snow-cone arts, and on a very basic level the pineapple snow cone pictured above was a fine specimen, sweet and cooling, but look closely at the photographic evidence and you will see what should never be.

Is a snow cone some common convenience-store slush? It is not, and I would dishonor the memory of my dear uncle by treating it as such.

You need a spoon, not the flimsy, narrow "spoon" at the end of this straw, to scoop up the ice and syrup of a snow cone in proper proportion. With a spoon straw -- assuming, of course, that a chunk of ice doesn't lodge along its length, preventing you from enjoying your snow cone at all -- you will end up sucking down far more syrup than ice, thus defeating the entire point of a snow cone.

Baroness Elba von Wiederhold, if you are reading this, (and I suspect you are), know that while you might have stolen Uncle Aeschylus' head, you cannot steal his legacy. To hell with you, baroness. And to hell with you, spoon straw.