The World Goblet Round 3: Italy vs. New Zealand

It's put up or shut up time for Italy -- they need a win to have a shot at staying in. New Zealand can't slack either, as they're even on points with powerhouse France heading into this last match. Italy shows up strong with a Montepulciano d'Abruzzo, one of Gut Check's favorite regions to scour for value, while the Kiwis step out with a chardonnay-dominated white blend.

Next: Some gotta win, some gotta lose... 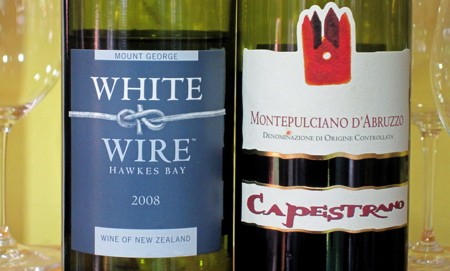 2008 Capestrano Montepulciano d'Abruzzo ($11) Montepulciano characteristically turns up cherry-red in the glass, but this one's such a deep purple it does everything but stand up and sing "Smoke on the Water." Give it a while and you get a hint of earthy, spicy regional character comes through, though the folks in the lab are probably working hard to eliminate that for the next vintage. Worse, it tastes so fruity we'd be tempted to believe it's artificially flavored.

The great strength of value-priced Italians is their ability to withstand industrial winemaking practices and still convey some essential Italian-ness, but it seems that's no longer a sure thing. A sad day at Gut Check HQ. Like the man once said, this is a wine for laying down and avoiding."

2008 White Wire Hawke's Bay New Zealand ($11) What's that smell? a touch of rose, and fresh, ripe peaches. Given the subtlety of the scents and the wine's pale straw color, it tastes richer than you might expect. The peach is joined by some minerally accents, balanced with a zippy citrus that lets the wine glide into a long, graceful finish. A blend of chardonnay (86 percent), gewürtztraminer (6 percent), riesling (5 percent), and pinot gris (3 percent) with those bit players adding a lot of character without making the wine sloppy.

Well, this was unexpected. We has our money on the Old World and didn't see this chardonnay-heavy kitchen sink blend from New Zealand till it popped us in the piehole. But that's why we open the bottles. The Montepulciano is just depressing. Way too many red wines in this competition have tasted essentially the same despite coming from all over the world and being made from all sorts of grapes. What's the point? Well, in the World Goblet at least, they get no points. Screw 'em.