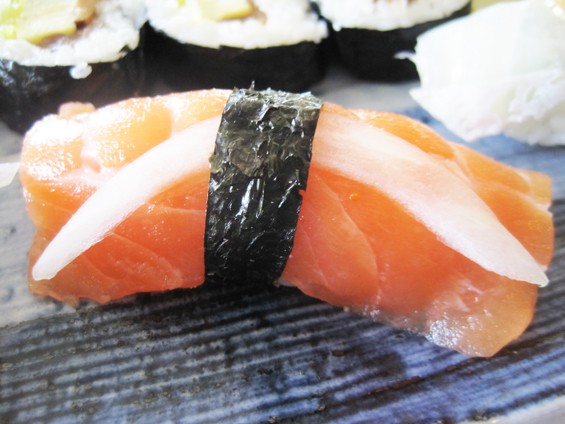 Salmon certainly isn't the most exotic seafood at Nobu's Japanese Restaurant. It probably isn't the tastiest, either. But after numerous visits to one of the area's best sushi restaurants, it remains my favorite.

The salmon is impeccably fresh, of course, with a clean, sweet flavor and a texture that, if not as luscious as tuna, still manages that seemingly impossible balance between buttery and meaty. There is a powerful smear of wasabi underneath the salmon, and the rice is properly seasoned.

But the grace note here is the crescent moon of raw onion secured by seaweed to the top of the salmon. It adds textural interest and a subtle punch of flavor. It is also, simply, lovely -- a reminder, in a time when you can grab sushi to go in any decent grocery store, that this isn't merely food but a form of art.